A bit late on this blog for the annual UKOUG conference in Scotland. I love the regional events, they cover a little bit of everything and give a chance for people to come together, learn and build local connections. 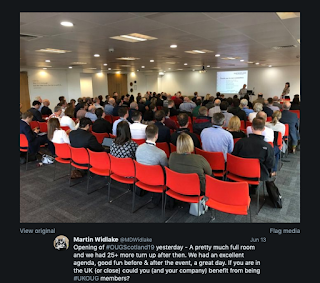 Polly Pervis from Scotland IS gave a great talk about IT in Scotland. How more local can you get?

Then there were 36 sessions over 6 streams. I had the privilege of presenting twice. Up first on which cloud route for applications and at the other end of the day another on extending SaaS with PaaS.

I had good audiences for both, and they are too of my more popular sessions currently. Another is on Chatbots with SaaS but they had Grant Ronald presenting on this so I got the chance to listen to him and catch up on a PoC we are working on.

Why do people attend conference? To learn and to network are the most common answers but sometimes I find people on the 'circuit' simple give their presentation, take part in the networking events and don't actually learn anything new themselves.

At this event I spent time with SplashBI who have an offering for Oracle SaaS and I wanted to understand how it works. This has led to several conversations and a better appreciation of how they have approached this.

I also spent time with Mike Durran from the analytics product management team and we discussed how they were looking to support SaaS more and more and he put me in touch with the lead for the Fusion Analytics Warehouse now called Oracle Analytics for Oracle Cloud Applications announced by Larry Ellison at Open World last year. More information was released last week.

Some of the conversation was under NDA but again an example of the value of being an ACE Director. I had never met the VP Mike put me in touch with, I am not an analytics expert but he was willing to talk to me and we had a real conversation about their strategy and approach and it very encouraging about how they are adding value to SaaS.

I then had the opportunity to followup all these conversations at Kscope last week where there were dedicated analytics.

There seemed to be travel and weather issues that affected a lot of travel to Glasgow but I was lucky and both my flights were simple.