I remember last year lots of speakers saying how much fun this event was, and later in the year Kamil, the brains behind this event and fellow ACE Director, asked me why I had not been part of it and I promised I would try this year. I did submit and luckily I was accepted to give my chatbots session and asked to be on a panel session.

Since this was earlier September and my daughter was still not back at University I asked her to come with me and we decided to make it a long weekend. The event was in Sopot, one of the 3 Cities, made up of Gdańsk, Soport and Gdynia which make up the TRi-City.

We flew Ryanair, which also makes me nervous but the flight out was fine although I did pay for Fast Track at Stanstead we has made an industry out of creating record beating queues.

We arrived late at night so stayed in the airport hotel. The next morning, we got a taxi to the venue which was also our hotel, right on the beach! We dumped our bags and walked into the town centre and caught a slow train to Gdansk city centre.

I am a great believer in City Hop on Hop off buses and it didn’t disappoint. I have to admit that whilst I had heard of Lech Walesa and Solidarity trade union and though I knew a little of Gdasnk I had no idea this is where World War 2 started!! I also learnt a lot more about the city and certainly was impressed at how beautiful it is.

Then we wandered around the city and around the estuary before meeting up with other speakers at the welcome dinner. 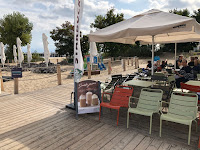 The event was over two days, a Friday and Saturday, with a great agenda. Both my sessions were on the Saturday and I had lots of the day job to do on Friday but it started badly with not being able to connect to the internet. I am used to poor connections at conferences but the was a joke. I got really stressed but thanks to moral support from my daughter and IT support from Alex Nuijten and a lot of luck I got enough wifi to at least run through my demos and get on with my work.

I even went out to Starbucks (on the beach) to work for a while as their wifi was better!

I joined the event mid afternoon and then went to dinner with the dutch contingent, we went to a Ukrainian restaurant and the food was amazing. So much so we went again for lunch before leaving Sopot on the Sunday. We then went back to the hotel for the after party. I believe many delegates and speakers went on to a club after the after party finished at 2am and the last people finished about 4am.

However I was a good girl / am old, and went to bed early as my session was first up Saturday. Considering it was post after party my audience was quite good. I always panic at the last minute that my 'why do' something presentations are of little value to these hard core technical audiences, but they aren't. There is no point developing the best applications if they have no value and the end user can't get what they need.

This was my chatbot presentation and I would say it was straight forward but a cloud demo with really poor wifi is a recipe for disaster. I had tried a myfi connection with no success but luckily a delegate let me connect to his phone. We got there..........slowly

The audience were great, there were really good questions which is always my measure of success. Stress over, I relaxed a bit and then it was time for the Panel Session.

The panel session had a large contingent, very broad and we sat on two sofas, whilst drinking our POUG beer (note to self, if a panel session is going to be this good, don't drink the beer without ensuring you have an inconspicuous path out to the restrooms). 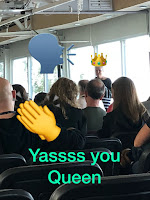 The discussion was led by Kamil, who was an excellent panel facilitator. The discussion was  based on a previous argument debate between Kamil and Bryn Llewellyn on whether Oracle should share the database internals or users simply trust that it works.

As well as Bryn the very technical group consisted of:

It was such fun. Again I thought it might be over my head but actually I had lots to say. I work with SaaS which is a closed box and it is so frustrating when with a bit more knowledge about what is going on we could help ourselves. I talked about talking to Oracle support where the user knows more than the support analyst. That isn't it a criticism it is a reflection of where we specialise and they have a lot to cover. Anyway I got an amazing reaction from the audience and my daughter sent me a picture to say she was proud of me. Not that she had any idea what we were talking about :)

Bryn was quite assertive in his position was Kamil held court well and ensured everyone had their say. I loved the banter, it was fun. 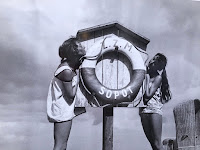 That evening we ate at the Grand Hotel overlooking the beach nd the pier and the next day after breakfast on the beach with those who stayed on, we spent the day wandering around the beautiful town of Sopot, before flying home to London.

Thank you Kamil and Luiza. I want to come back, it was such fun.