As part of the UKOUG team that delivered the conferences in Birmingham I couldn't feel prouder. The volunteers put a lot of work into all the decisions that need making in the months before and the team work their socks off upto and through the event.

For me, the Sunday was a surreal start to the event. I landed at 04:42 from the APAC Tour  and caught a coach up to Birmingham. I finally got checked into my hotel, had a shower and headed over for registration for the Super Sunday content that kicks off UKOUG_tech17.

Then we had a board / management team meeting, a quick run through of all the conferences, ensuring we all know what is happening.

Sunday was also the Volunteers' Drinks and then this year we were joined by the EOUC Presidents who were visiting UKOUG and our speakers. I left about 9:30, I don't really get jet lag but needed to make sure I got a good night's sleep.

Monday morning was a quick run through of the Keynote, which John Abel stepped up and gave. We had arranged for Steve Daheb to give the keynote, but thanks to his flight being cancelled, and nothing available that would get him here in time, he had to cancel. Having said that John did and excellent keynote and began by telling us his first presentation was at UKOUG. How inspiring is that?

Paul Sutton our President introduced John and he really enjoyed his first conference in this role.

Cliff Godwin, also had a cancelled flight, but a rebooked flight via Frankfurt and a nervous rush to Birmingham, he made it with about an hour to spare. Cliff has been at UKOUG every year since he took up the lead for EBS and we love him being there. 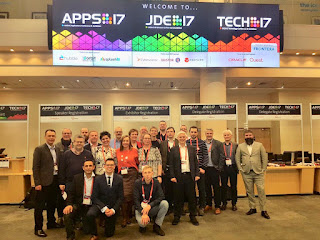 The EOUC Presidents had their meeting all day and enjoyed their visit to UKOUG.

Monday finishes with the community drinks, a chance for everyone to catch up and meet others with a similar challenge. The evening is the only evening available for off piste entertainment, so the 3 elected board members each hosted an event.

Paul alongside John Abel hosted the Oracle Executives. Brendan hosted the EOUC Presidents and I on behalf of the Oracle Developers' Community hosted the ACE dinner.

The Developers' Community again sponsored the speaker awards at UKOUG

Tuesday Morning kicked off with the Welcome in IT breakfast. I wrote a post after OOW talking about this idea, and it was a great success. I started by explaining why this was being called Welcome and what we were doing at UKOUG. 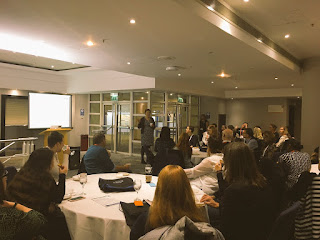 Then Jennifer from the Oracle Developers Community talked about the ACE program and encouraged everyone especially women to step up if they met the criteria for the programm.

The only issue with the breakfast was that people had to be turned away.

Tuesday was also a specially for JDE, they were celebrating their 40th birthday. I had a good meeting with Lyle Ekdahl as part of our continuous engagement for our mutual communities. 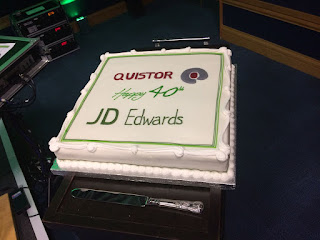 Tuesday's sessions finished with our motivational speaker, Kriss Akabusi, who was not only as funny as expected but also very insightful and inspiring. 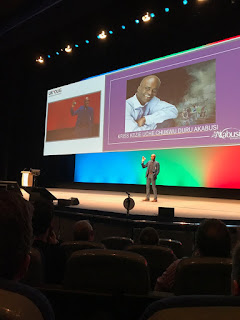 Paul went our on stage to introduce him and I was 'the voice of God' something that Kress later mentioned on twitter.

Then it was back to the conference exhibition for the party. The theme was retro and there were games to play and people had a great time. 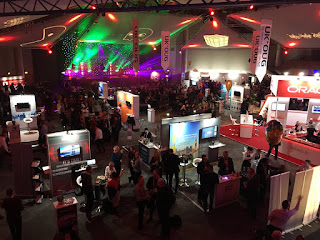 For me, it was fun and the band had everyone tapping their toes, but the best thing was seeing how much the office team were enjoying themselves. The amount of work needed to make these events work is unbelievable and they deserved to let their hair down. 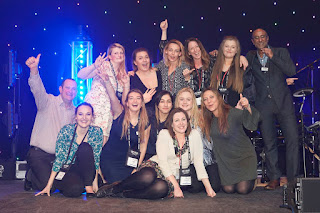 Wednesday was another busy day. I was with Oracle Academy who we were trialing a next generation initiative. Brendan and Tim Hall who are old hands at inspiring students had the chance to talk to them about careers within the Oracle community and then they had the chance to attend some sessions.

Then it was almost over, for another year. I'll write another post about my sessions and most speakers have blogged about theirs.

There is lots of data to analyse and determine what worked and what didn't, and how we can make 2018 even better, but I'll leave you with a few statistics. 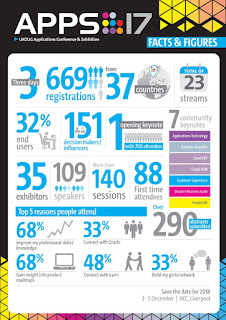 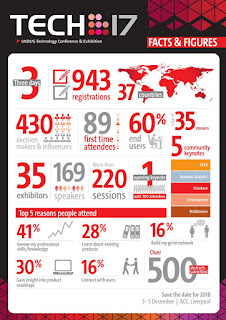