I spend a lot of time at conferences and expected to enjoy the Oracle Modern Business Experience last week, I didn't expect to be simply blown away. 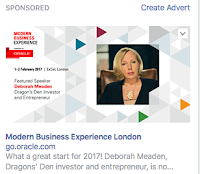 The targeted marketing obviously worked they say there was over 6,000 registrations, however I still had an advert for it on my Facebook today 3 days after the event.

As you know my area is the Cloud Applications (formerly known as Fusion) and probably 75% of this event showcased customers who have made the move. It is amazing that to think there are so many users today, just a few years ago it was a struggle to get a reference customer and when one did speak you saw them rolled out at every event. Today there is a abundance.

As ever I was like a mother hen, proud of my several Certus customers who gave presentations about their projects and took part in customer panel sessions. 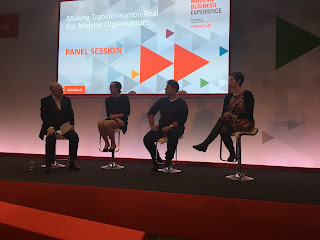 I was privileged to attend the Oracle Women's Leadership event on the first afternoon and the speakers were so inspirational.

The first session was a panel session 'Grab the Power to make the Change':

Safra Catz talked about being a tiny women in Wall Street and not being taken seriously, so instead of fighting it she went after customers from the emerging tech industry, and then eventually moved to Oracle.

Joanna Fielding from HSBC and Kimberly Ellison-Taylor talked about how they had sponsors who held them be recognised for their talents. Later I spoke to Kimberly for quite a while on the value of the afternoon to men, however would women have been as candid if they had been there? Perhaps they should have a video link :)

Emma Codd from Deloitte talked about Respect and Inclusion and the work she has done in her organisation, the video she had made for their program is brilliant.

Then there was another panel on "marketing to Millennials' with Amanda Jobbins VP of EMEA Marketing at Oracle, Catherine Walker from Vodafone and Maria Topornicka from Middlesex University and Alex Broadley from Hang Technologies, who inspired us that at only 22 she was doing so much. 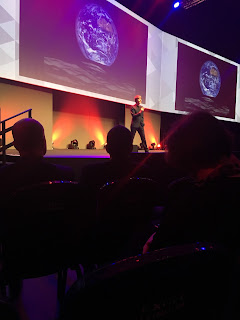 There was a lot of thought leadership sessions that were not Oracle specific and I enjoyed several of those but, and if you follow me on twitter you already know, my favourite session of the two days was Dr Brian Cox. It was amazing how much he packed into a standard presentation.

I heard many people say that this event was better than Oracle Open World for Cloud Applications and that shows it was a game changer. They will be posting some content here

And remember if you are interested in what it takes to move to the Cloud Applications, UKOUG have just the content you need