This was my second visit to OUG Panama


Their President Edgardo Sanchez was a fantastic host, I didn’t realise when I accepted his invitation to dinner on the Saturday evening I was the only person in town, but he took me with his family to Tinajas a very traditional Panamanian restaurant that included an amazing show with all the costumes and dancing indigenous to Panama. 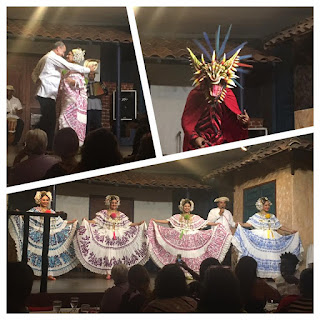 On the Sunday Edgardo took Alexis Lopez from Columbia, his wife Clara and I to see the Panama Canal. When I was here in 2014 I missed this trip so was very keen to do it now. Edgardo works for the Panama Canal Company so the tour was the public tour, to see the locks operate etc, but also the headquarters, the amazing setting and you can’t fail to be in awe of the setup. We were also incredibly honoured as the Canal Extension; an addition canal for even bigger super ships has only been opened for less than a month.


Next to went to see traditional buildings from different time periods in Panamanian history and crafts, then we finished the tour with a great meal in the marina. Half way through there was (another) thunder storm and although we did get a bit wet at our open air table the staff obviously get plenty of practice of bringing down the awning to keep out the rain, although they did have to fight the near hurricane winds accompanying it.

The Panama Conference was held in our hotel, which was actually in a shopping mall, convenient for Tim Hall who had to do emergency shopping due to KLM thinking he didn’t need his luggage.

Since we were staying in the conference hotel, it was a quick start to the day. The event had 120 registered and 3 streams, it kicked off with a quick plenary session from Pablo Ciccarello talking about OTN and the ACE program. 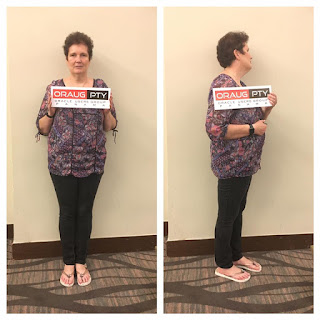 Over the weekend a couple of Oracle speakers had pulled out so I volunteered to do an extra session here, which meant 4 but that isn’t an issue, once you are at an event you may as well be contributing all you can.

My first presentation was “what to consider for an move to Cloud Apps” and in the audience I had several people from the Panama Canal Company who are big EBS customers and several PeopleSoft customers, so it was great for me, and quite interactive. This is what I love most about the opportunity to present worldwide is the opportunity to hear what organisations are thinking and doing. The Panama Canal Company are also implementing Hyperion Planning, so I was able to include a discussion on how essbase is embedded into Cloud ERP.

Next up was my presentation on “Digital Disruption and what that means to the Oracle Economy’ - people think they know all this but when you start the discussion and look at all the changes in what they are doing the discussion always brings up new examples, I can add to the next presentation.

My third presentation was on PaaS4SaaS and I think I am going to have to either split this into two or severely cull some of it. When I presented it for the first time at Collaborate 2015, I had our Proof of Concept from January 2015 to share. Since then I have that story as it has extended, improvements made by Oracle in the integration and then here in Panama I for the first time did a live demo of Application Builder Cloud Services. Just an hour having presented my findings to the Product Development and Management teams in Oracle over a webcast at lunchtime. 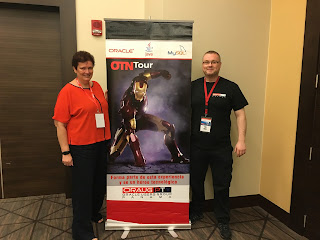 In the penultimate time slot there was a session entitled “Cloud HCM’ from a local partner. I knew it was in Spanish but thought it would be great to see how it is positioned locally. After just a few minutes I realised it was a presentation (and very salesy) on Taleo, which as I have explained myself if Oracle HCM, but not the original Fusion application I was expecting. Perhaps I should read my own blogs.

I was to present ‘What’s the Weather Like Where you Are? Are Cloud Apps the same the world over?” in the last slot but the timings for the day had progressively lost synchronisation with the agenda, and that combined with an Oracle session that for some reason waiting 20 minutes before starting, meant there was no audience left to present to. Never mind, 3 was defiantly enough and I had a great day. 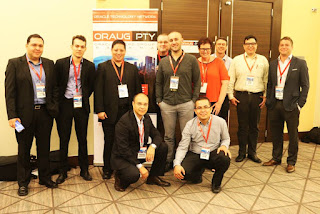 After a very long day, Edgardo invited us to dinner again but Tim, Karmen and I had a fairly early flight to Costa Rica, and politely declined.

Thank you to everyone in the Panama Oracle User Group for making us so welcome, and kicking off the OTN Tour Latin America so well.