This is a tour I really enjoy, but as OOW was so late this year and more importantly UKOUG  just days after, I was worried I would have to pull out of this tour.

The tour visited 5 places but I was only signed up for the last 3, Sydney, Perth and Wellington. 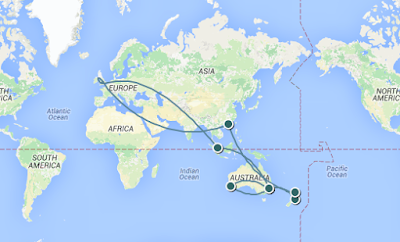 This was a crazy itinerary and was 28,733 miles and included 61 hours of air travel time, plus lay overs. That is more than my 7 year old car has done.

I found the being down under in December as Christmas ramps up quite weird, the same Christmas songs and decorations, but people wandering around in flip flops and shorts.

Travel wasn't too bad, except airports are freezing specially when you are cold. I did all the internal travel with Richard Foote and he was great company, although one security officer did suggest we looked liked we had been married for 30 years!

The journey over was pretty uneventful, travelling via singapore, I arrived in Sydney just as a heatwave broke, it has been really hot the day before (40'C ) and quite cool when I got there (eventually reaching 25'C), but never mind I still took advantage and had a quick couple of dives in Manly Bay.

At each of the three events I gave two talks, and the matching white papers can be downloaded - PaaS4SaaS and Digital Disruption in the Oracle World

Coming back, I had a night in Auckland after the NZ event, and an old friend drove up to have dinner with me which was wonderful, and then I had an early flight to Hong Kong. Thank you Cathay Pacific for the upgrade, and then a 7 hour lay over until my BA flight to London landing in Heathrow at 5am. Then just 6 hours later it was kickoff for UKOUG - perfect timing!

Thank you to the user groups, Francisco, OTN and the ACE Program for making this happen.

Thank you for going to all the trouble to come over, Debra.
Always welcome.

thank you for the invitation