I have been honoured to speak at Oracle related events all around the world but last year when in Latin America, after a conversation with Tim Hall (OracleBase), decided that this year I would try and do something in Africa, as being an EMEA ACE, Africa is one third of my own region. The initial idea was to see if we could arrange an OTN Africa Tour, these tours are the best value for both Oracle and for the speakers who have the opportunity to speak several times in a shorter period of time, however there are very few engaged user groups in Africa – unless you know differently…

The SAOUG usergroup in South Africa is not only engaged but also an innovative user group that even has a loyalty scheme for members that gives benefits from companies who are also members.

So I approached SAOUG and was delighted to find they have a vibrant applications community and a large annual conference. But did I really want to go to South Africa?

You hear so many awful things about South Africa, how dangerous it is and I am not a very brave person. I could have just arrived, stayed in hotel, done the conference and left, but that is not me. I really do believe that travel is still a privilege and I don’t count airports and room service as the pluses in that list! I want to see the place and have done the open topped double decker sightseeing bus in most cities I have visited, but perhaps that kind of trip in down town Johannesburg isn’t the best idea. However another really amazing thing about being a speaker is the community and the friends you make. It doesn’t matter where you go there is someone you know. In South Africa I knew Marius Wentworth the SAOUG Chairman I had met him in the IOUC and I also knew Dina, a user who I had met at UKOUG through a mutual friend in 2008, and we had met again since at both OOW and earlier this year at Miracle Denmark. Dina invited me to stay with her family and promised me it would be safe. So the big adventure was on. 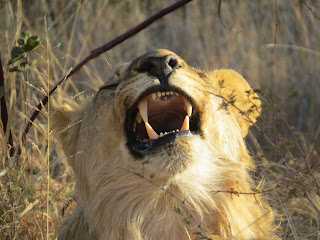 Dina took me to Pretoria to look at museums and learn about South African history, we also visited an animal reserve to ensure I saw the animals as they are fed there. Then we spent two days in Pilanesberg NationalPark and I did see the animals in their real environment as nature intended. WOW. My real love in life is geology and after the conference Dina took me for a few days on a Waterfall tour and I was in heaven. The scenery, rocks and waterfalls were breathtaking, and the name of one place ‘God’s Window’ summed it all up, and my favourite place? Bourke’s Luck Potholes. 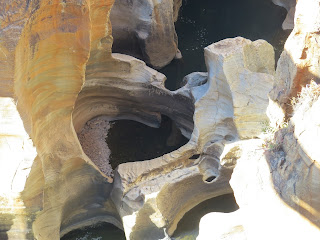 But back to SAOUG and the conference. I presented on Mobile ADF and how Fusion UX Design Patterns could help, this was something I have been working on with the ADF Team and the UX Advocates group, and Sue Duncan and I did a joint presentation in New Orleans at KScope. Really great audience, most of whom were about to start their mobile journey and desperate for any advice on where to start. My second presentation was on BI & EPM in Fusion Apps, thanks again to Mark Rittman (whose book had pride of place on the bookstall in the conference), for encouraging me to talk about this. SAOUG was the 5th time I had given this presentation and I love the technical audience and their questions. Both my sessions were full and I could have carried on answering questions for hours, so was really pleased when the EBS SIG asked if I would do a Q&A in their final session of the conference.

A conference for me as a speaker needs 4 things:

So what did I learn?

Would I go to SAOUG again? You bet, and next time I intend to take a few friends along and just maybe 'will go in Summer'.
Posted by Debra Lilley at 13:16

Thank you for staying with myself and my family Debra!

Your presentations were great!

You are welcome to stay with me again next time (you may bring your friends too :-)

Thank you Debra for attending the SAOUG2013 conference and sharing your knowledge and experience to the Oracle user community especially on Oracle EBS and Fusion. We welcome you back anytime and look forward seeing you back in South Africa.

Thank you for being "brave" and coming to Africa. It was a pleasure to meet you and thank you for your valuable input to our conference.

Thank you for coming all this way - it was great having your insight and depth of Oracle knowledge at hand in the SIG. I think that we learnt alot from your experiences and greatly appreciated your time.