I was in Australia in March with my day job at Fujitsu but also had the opportunity to speak for both Quest at a SIG and an ODTUG Seriously Practical BI/EPM event whilst I was in town. Daniel Strassberg from Quest told me afterwards that the member feedback was poor and that they had said I needed to practice the presentation more. I can be pretty paranoid and was actually really disappointed till the next day he said what I really needed to do was to come back in August to their annual conference and give it again. Stupid me, how long have I known Daniel? I should have known better, and yes I came back.

QUEST and AUSOUG normally have a single InSync conference in Australia and I have spoken at it several times before, but this year there was a different format. QUEST would have their InFocus Event in Melbourne on the Thursday and Friday 15/16 August and AUSOUG would continue with the InSync name and have a conference in each state capital. Sydney was the same two days as InFocus and Melbourne for them would be the following Monday and Tuesday. There were the other states but two far apart for me to consider. The plan was I would fly into Melbourne, do the first day of InFocus, fly straight after to Sydney and do masterclass on Fusion on the Friday, and then return to Melbourne to do more traditional sessions at InSync there.

I decided to go out a day early and do a ‘tourist’ day from Melbourne. This is my 4th trip, including a few times for Fujitsu but I have never had the time to see anything except the AbbA experience exhibition when it was there! Don’t ask! I wanted to do the Great Ocean Road, but before that I spent a lovely day with Bambi Price from ODTUG and her husband; you make so many friends in User Groups but you have to take the time to nurture those friendships between conferences which are just too busy. 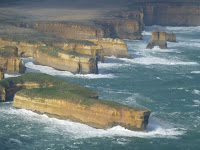 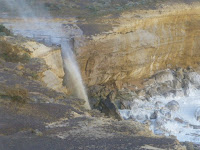 The actual tour was a full 12 hours and over 600km but it was magnificent. The geology of the coastline is unbelievable and I did the very touristy thing of having a helicopter ride over the Apostle Rock formations.

Unfortunately I hadn’t realised that winter in Victoria, unlike winter in South Africa last month, is cold, and windy. The helicopter was petrifying whilst over land. I held on so tight my hand hurt and my breathing was so laboured the pilot asked me to switch of the microphone on my headset. Once over the ocean it was fine and just awesome. I also experienced something I had never seen before; upside down waterfalls, where the wind was so strong it blew the water back up the cliffs.

The QUEST conference was in the Convention Centre and I stayed at the Hilton Hotel there. I must give them a shout out as I got another suite upgrade, having had one as an upgrade when I was over in March as well (I could get used to this, unfortunately my other hotels in Australia were not as nice). User groups have got to constantly look for new ideas to become relevant and at this event I think QUEST got it right. They worked hard at the community aspect of their members. They even had a small display of merchandise that members produce, so people could visualise the companies that use JDE; Underwear, Stockcar memorabilia, bedding, electrical items and wine that I will come back to, just a few of the items. The idea was simply to display them but many were then raffled off at the end of the event. 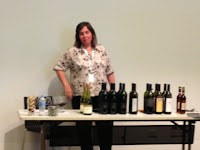 JDE has great processes for ‘Vine to Glass’ the Wine Industry, and their current president Graham Baker is from Yalumba Wines, (other wines are available, and in fact when Oracle first obtained JDE through their PeopleSoft acquisition the president was John Brown from Brown Brothers Wine). The conference this year was kicked off by Jane Ferrari who is their storyteller. Jane was very funny, she started by saying she had no IT ability at all but that her job was to go out tell the Yalumba story and create ‘fortresses’ of people who believed in their wine, and would continue to talk about it after she had gone. That is what the ACE program is about, Oracle encourages the ACEs to be storytellers, tell what they have learnt about the Oracle products and the way they have used them. Take those stories out to the communities at conferences, through blogs etc and leave people talking about it.

At the end of the day Jane also held a wine masterclass which was heaven, and without knowing why it she had everyone in stitches. Remember Jane knows knowing about IT and especially Oracle, but she started by saying. “I must start every story with a disclaimer about drinking sensibly, but now I have mentioned it we can move on”, her very own “safe harbor slide”, not very different to Oracle at all! 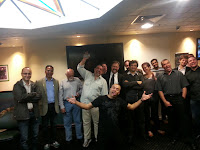 I did repeat the presentation I gave in March on what Fusion tells Organisations today, and hopefully the feedback will be better this time Daniel. I also talked about consolidation and cloud, but all too soon it was time to say goodbye and catch my plane to Sydney.  I could have stayed for the 2nd day as AUSOUG cancelled their Sydney event, but the flights were already booked and too expensive to change. However all was not lost, Yury Velikanov has been organising some MeetUps for a while and got all those who were in the same situation to talk about Cloud. It was about 20 people in a room in a bar in Sydney and it was brilliant. The questions were brilliant. As well as Yury from Pythian there was James Antony from Red Stack, Anton Els from DBVisit and a local user another of the organisers Nuno Pinto Do Souto . 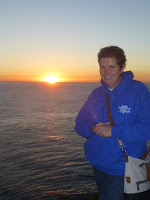 Yury Velikanov also collected us at an unmentionable hour to take us to
watch the sunrise over Sydney, which he had done for me back in March as well. This time I was more prepared with suitable shoes and a warm jumper Bambi lent me that advertised ODTUG (Great product placing). Then we went to the now legendary coffee shop for breakfast.

After the MeetUp I had chance to catch up with the other Bambi, B2 - Bambi Staverly and her husband for a beautiful meal under the Sydney Harbour Bridge. This Bambi used to be the Oracle liaison for usergroups in ASIAPAC. The usergroup community really is one big family, one I am honoured to be part off. 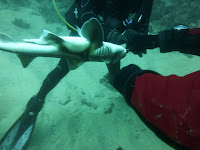 On the Saturday I had another opportunity to go diving from Manly. I hoped secretly to see a shark and I did but not what I expected, this was a baby Port Jackson Shark that had been injured by linked fishing hooks. We spent a while trying to free it to no avail and eventually it was taken up to a dive boat were the hooks were removed with pliers, and the shark returned to the sea and hopefully a complete recovery.

InSync cancelled a few of their state conferences and as a user group leader I know these decisions are not taken lightly but it does affect all stakeholders, and I hope it doesn’t hurt the community in the long run and that they recover quickly. But the conference in Melbourne went ahead; it had affected some speakers so those who were there were asked to do a few more sessions. I hope the delegates were happy with the final agenda, and although some of my sessions were small those attending had lots of questions so I think it was well received. I did a four hour masterclass on all things Fusion, based loosely on the duet Floyd Teter and I did in Utah last year. Afterwards I was exhausted and slept a full 12 hours afterwards even missing out on the first of two evenings with Penny Cookson, her husband and Tony Jambu. I also managed to catch up with Francisco Munoz Alveraz for about 10 minutes. Did I tell you just how great the people are you meet in this role? On the second day I did a standard presentation on Tailoring Fusion and then a Q&A about EBS v Fusion, which is a great way for me as a user group leader to understand what users are thinking.

All too soon and it was over but not before I attended a session on Oracle’s Applications Strategy – Cloud and On Premise from Doug Hughes VP Applications Development which was really good at talking about the changing shifts in customer expectations about IT deployment.

So a great time down under but time to go.