Last year at RMOUG I gave my first deliberately technical paper, however during my performance I said several times 'I am not technical but' and that was the feedback. Several people commented that I should not say 'I am not technical' if my presentation is aimed at a technical audience, they also said it was very educational about the technology being used in Fusion Apps, which was my aim, so I was very happy and vowed to sort out the 'technical' bit.

Over the last year I have therefore re-invented myself as 'technically literate', but I am still not a practitioner. My role in Fujitsu is about education, learning what is happening in Oracle and teaching that to my colleagues (I work in a very large global practice), our sales and account teams, our existing and prospective customers and then within the ACE and User Groups my most rewarding role is to further educate by sharing my knowledge with the wider community.

When submitting for this year's RMOUG, which is one of my favourite local conferences I did an update on my paper from last year 'Thinking of Supporting or Extending Fusion Applications' which was great for me because this year I am not under NDA and can actually talk through the applications. It was not a big audience, only about 35 however only 1 person had attended last year, so a new audience with new questions and everyone went away having learnt something which is what I use as my success marker.

RMOUG where good to me they gave me an early session on the first day which meant I got to relax early on. The quality of speakers this event attracts is very high and this includes many from the ACE Community. In fact the opening keynote was an ACE panel which I took part in, but more about that in the next post. I like to attend sessions from other people to challenge myself, not just to learn what they are intending to teach but also to learn from their presentation styles.

There are two very different methods I want to comment on, from two great friends, and I admire both them and their styles. 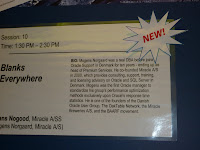 Mogens Nørgaard spoke with just a few hours notice, he had not intended to speak but a speaker had to cancel and he agreed with Peggy King, RMOUG's president he would take the slot. Mogens like to be controversial, invoke discussion and yet is knowledgeable enough to answer the questions. He talked about the Optimizer, RAC for SQLServer and then his experience with Oracle Licensing. The audience were very engaged and whilst there was not a slide, a white paper or even a plan in sight (WeDoNotUSe) he pulled it off. I admire this but don't think my nerves would ever stand up to it, although I have done an Unconference Session on Fusion Apps and then shutting me up was the problem, perhaps you just have to be really, really sure of your subject area. When I first started this blog my employer gave me the advice that a good blog is controversial and thought provoking, perhaps Mogens is just a human blog.

The speaker I most wanted to see was Cary Millsap, I follow his blog avidly and whilst he is very technical and a complete genius he has a way of getting the message across as pure common sense anyone can understand. His paper was about Thinking Clearly About Performance, It had 20 points to cover and yet he started one of these by saying that humans do not like a list longer than 10, true, but in Cary's case I would call this double the value (and tweeted that at the time). Not only did I learn from his presentation and really recommend you read the paper, but his slides are just excellent, simple, uncluttered and witty. I went to congratulate him afterwards and he said he was glad I learnt from it, as he thought of me as the lowest common denominator, it had been his son but he is now too clever. What a cheek, I am sure he was just joking - but if it he isn't I am very honoured. Perhaps I have not reached 'completly technical' yet but I have one of the best teaching me.
Posted by Debra Lilley at 23:17

Debra, My feelings about presenting and teaching have always been that you need to be yourself. Mogens likes to invoke controversy as a way of challenging people to think the ideas through. Cary is a great guide in his presentations. With him, you get to sit back and think about the ideas and ponder. Both are effective in their own way. As I believe that you use your dry sense of humor to get your point across and very effectively too! So good to see you again in Denver and hopefully you can return again next year!

Thanks for your kind words Carol, interestingly my family think I have no sense of humour and to be truthful I think I am more cynical than humorous

Hi Debra ... It does not surprise me at all you talking Technical. With this speed soon you will be heading the technology streams. You explain things without using too much techie Jargon which sinks in better and use of simple example of your charger is very effective.
It does not have to be complex fancy thing which techies like to make and then difficult to understand.
I will not comment on your sense of humour type or lack of it. As I have two small children dependent on me.
Aamer Janjua

It is true that Cary and Mogens have very different approaches when presenting, but that's because their style comes from who they are. I also think that's why they are both so good at what they do. I can't imagine Cary giving a Mogens-style presentation, or vice versa, unless they were intentionally making a point of mimicing each other and then it would be very, very funny :)

Perhaps we should schedule a dual presentation and they can attempt to give each other's talk.

And yes, you are going to have to stop saying that you're not technical. There's just different kinds of technical ...

Mogens and I are way ahead of you. We discussed this EXACT idea in Las Vegas in 1999. You can ask him how I explained it would turn out...

You can ask, but I cannot for the World remember what we talked about. My past is a haze.

My presentation in Vegas in 1999 was one of the very few presentations I will think about when I'm sitting on the porch of the Old People's Home, not least because Cary took care of my slides while I talked. Interesting concept, as he would change the slides behind my back...

This post was about my admiration for you two guys, then you come along and spoil the illusion I have built up for everyone.