OUGDK is no more - welcome DOUG

One of the things we take seriously in UKOUG is encouraging other user groups. In the same way we think users learn best from sharing experience we believe it is true of user groups themselves. And in the same way, user groups together have better access and voice into Oracle.

January is the time of the User Group Summit in Redwood which Ronan, James and I will attend. It is 3 solid days of executive and product management briefings and meetings fitted n around it. My Product Development Committee has two meetings both at 7.30am! And lots of opportunity to get together with other user group leaders and share ideas.

Not every user group can attend and it is important especially here in EMEA where user groups are more geographical in nature that the bigger user groups can represent the others, ensuring the wider voice is heard, and this is where the spokespeople of the EOUC come in. Our current spokespeople Janny and Heli do a great job at representing the other user groups and feeding back to them.

One of the challenges for geographical user groups is language. They may be limited in size purely by the available Oracle population for their language. It is very important for these groups still to network, and UKOUG wants to support this however we can. User group speakers also like to support where possible and I love being able to address other groups. 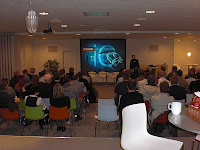 This week I was asked by Miracle A/S to speak at the Danish User Group which they were supporting. The usergroup has been inactive for a while and this was an attempt to relaunch. I can tell you it was a very successful day. Oracle told me they wanted 10 people to turn up and would have been delighted by 20. The 80+ attendees only had lack of car parking to complain about. There were plenty of volunteers and lots of enthusiasm to keep it going. I had a great reception and want to thank Miracle for making it possible for me to take part. They hold their own conferences and yet still want to give back to the whole community.

Glad to hear about the DOUG - one of the biggest international contingents at ODTUG Kaleidoscope seems to be from Denmark. A couple of years ago, I had a very pleasant breakfast at Kaleidoscope with a group of our Danish friends. The other big groups I've noticed are from the UK (of course) and the Netherlands.