If you work for an organisation that wants to be first with fusion Apps, get in touch I want to be part of that.

I have publicly said I thought Oracle were wrong to stop talking about Fusion Apps but they have now and more importantly removed the NDA 'gag' so let's not worry about the past and start talking. 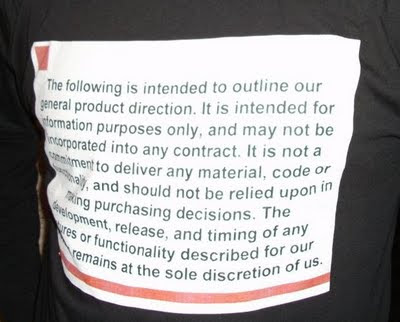 First, just to make it clear we are allowed to talk about Fusion Applications but they have not yet been released so every presentation from Oracle is still going to include the 'Safe Harbor' statement. (T shirts available). Oracle will release the Applications once all the validation is complete and they are happy it is ready for the market.

I hope that now people understand that Fusion Applications are a completely new User Experience built entirely with Fusion Middleware. That means that you can take whichever part of Fusion Apps works for you and integrate it to your existing applications or take it all or simply build your own Fusion portfolio.

I keep on saying it, but it is all about choice. If you haven't seen a demo yet then try and do so. UKOUG has 2 hours of demos on the Tuesday of their conference repeated on the Wednesday.

So start listening to your user group or to those people who know, like Floyd Teter (despite his horrible comments about me in his blog). As the Unconference I asked Floyd and basheer khan and Beth Correa to talk about their thoughts on the Fusion Validation we have all been privileged to be part of, and we all agree we expected mind blowing technology but it is simply the user experience that will make Fusion Apps the success that they will be. 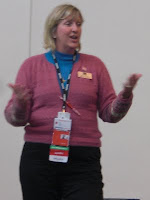 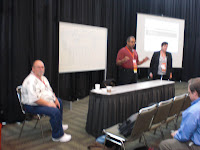