I am a creature of habit.

I normally attend Partner Advisory Boards on the Friday before OOW and arrange individual meetings at headquarters for the Thursday, I also like to have a day upfront to ensure I haven’t forgotten anything and that my presentations are ready to go. Therefore I traditionally travel out to San Francisco the Tuesday before the conference starts.

But, It seems, I am also doomed to travel issues, my airline decided to have its first pilots' strike in history and my original flight was cancelled two weeks before travel. I wasn’t too concerned as I thought that I could use my contingency day and simply move my flight to the Wednesday.

I left my house at 0500 for a 0645 flight to London. Everything seemed to be okay until we were told are that as the plane had been sat on the apron for three days since before the strike, when they started it up two monitors in the cockpit failed. Apparently they can fly with only one working but not with two out. The plan was to wait for the incoming flight from London and borrow one of theirs, however when it arrived it only had one functioning.

Plan B was to borrow one from another airline in Dublin, they would send the monitor up to Belfast and all would be fine. This put my 1130 connection at risk but there was another flight about 1400. There were no alternative flights to London with any airline as the strike it meant all flights were full.

After a couple of hours, (it takes two hours to drive from Dublin to Belfast), the engineer chased the part only to be told that they were waiting for a specialist courier and it hadn’t yet left. 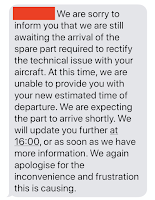 Later, once sure it was on its way, the pilot told us that he expected to leave about 1430 if it worked. Just before 1400 we saw the engineer run down to the plane with part but just a few minutes later at exactly 1400 we all got a text to tell us there was still an issue and the next information with bit 4pm. No more than five minutes later the pilot came into the lounge and told us we were good to go everything was working we were ready to board however when we left at 1500 several people had to have their luggage offloaded as although the flight was ready to go they could not be found. So sad, many hours delayed and then to miss the flight.

At London I was offered the next available direct flight which was the next morning. I asked about connecting flights and was offered one to New York but then I would only get to San Francisco 2 hours earlier and with runway issues there causing many delays and cancellations I decided to stay put. 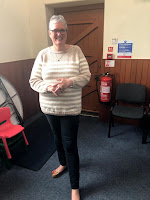 When am I travelling long-distance I try to take some knitting with me, it allows me to feel I’ve achieved something during long journeys and is good for de-stressing delays. However I hadn’t expected to complete this jumper on this journey. Guess I should be thankful for small mercies.

They put me up in a nice hotel at the terminal and my flight the following day went without incident but it did mean I missed my individual meetings at Redwood Shores on the Thursday, one with Hilell Cooperman who was to share with me the excitement around the new Oracle branding, Stefan Schmitz who is responsible for the OTB I use within Fusion and most importantly my annual catch up with Steve Miranda who owns apps development. 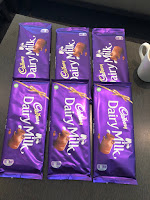 I always take chocolate to conferences, and this was no exception, but I also had vouchers for food during the delay and spent that on large bars of chocolate, all of which I had to explain on my arrival in San Francisco.

In contrast my flight home was without incident and the connection to Belfast was actually 25 minutes early but that doesn’t actually cancel out the 9 ½ hours delay on my original flight and out this could be my last European Union flight delay claim (another Brexit casualty).

As ever my faithful taxi driver was waiting for me at the airport I was soon home with another Oracle Open World under my belt.

That should have been the end of it, but I seemed overly tired. Sunday morning I was due to dive and I cancelled which is not like me, and then the next day I woke up with a full head cold, so spent my second day in bed. My excuse for how late these blogs are.