Fujitsu were again a major sponsor at Oracle Open World. Last year we were here to talk about project Athena our new chip for Oracle and this year Oracle launched the M10 so we had plenty to talk about. 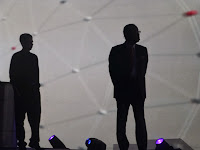 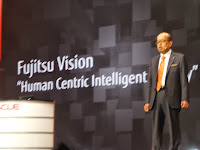 Our Corporate SVP Toyoki-san gave the first keynote of OOW being introduced by Ed Scriven. Last year Toyoki-san gave a good presentation and talked about our role in society which was well received but criticism was ‘too nice – not enough detail’ and this year he concentrated on the detail. You can see the presentation here. Personally I thought the content was really good, he talked about the world class benchmarks we have already achieved with the M10 but I think it would have been better is the presentation had been punctuated with more video and customer stories. Unfortunately it received a lot of negative tweeting and that is a pity. Ray Wang did criticise it but he also said he would give free consultancy for next year and he did search out Fujitsu afterwards to make the offer in person.

The stand had the most fantastic oak table with power as a centre piece which encouraged people to sit and work and I wanted to take it home, but even with my frequent flier baggage allowance that was never going to happen.

At our customer appreciation event there was a Traditional Saki Cask Ceremony to celebrate engagement of Fujitsu & Oracle. It was great to see VPs on both sides of the Alliance smashing the cask with such gusto. 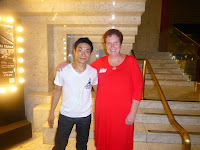 Fujitsu must also have managed the marketing coup of the century. At the start of America's Got Talent a Japanese man did a tribute to Michael Jackson, the judges liked it but said they didn't think he would go the whole way unless he changed his act. At that stage Fujitsu booked him for their event, but listened to the judges, added to his act and went on to win. Kenichi Ebina was phenomenal.

There was also a marvellous M10 cake complete with cables. It seemed a shame to cut it but it had to be done.

It was a great evening and all our customers and partners had a great time, full of Japanese culture.

And of course as Marquee Sponsor Fujitsu were part of the team that brought you the appreciation event and I loved you, hope you did too.

Then when everybody else has finished at OOW Fujitsu have a summit when all the teams globally get together, this is a great opportunity to share what we are doing and plan initiatives. There are some exciting things happening.