Larry Ellison got a lot of stick for not attending the earnings call just before OOW , which is actually not the first time but he had a different excuse last time. 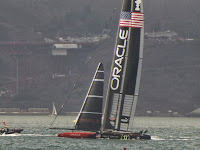 Actually I don't blame him, if I was that rich and my passion was sailing, I would have chosen the America's Cup also. Then he also missed his 2nd keynote which I fail to understand how anyone thought that with his team coming back for the best turnaround in history he would miss the final race? Interestingly in the past analysts have complained there is no succession planning in Oracle, and yet they also complain when he passes the baton. I personally think Thomas Kurian gave a great keynote, he may not be just as charismatic as Larry but the detail was there. 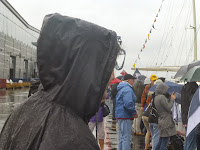 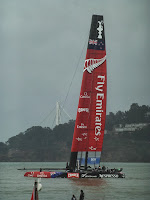 But what I liked about the America's cup being on during OOW was the opportunity to go see it in person, although I was not as lucky as Team Oracle. The Saturday before OOW is the only day I have free at OOW so it was great when Oracle announced free tickets. Along with a few other ACE Directors we went down to watch. Having had a few beautiful days at HQ it was a surprised to find it was raining but the forecast said it would only last a few hours, and we had our new cagoules from OTN which were fantastic, they kept us very dry except small puddles did appear in the front pocket. 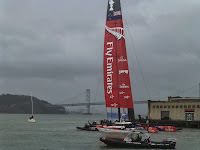 We did some shopping, seems everyone except Larry thought it was all over, the merchandise was 50% off and there was a chance to have your photo taken that looked like you were on a boat. Also kept us out of the rain that by now was horrendous.The beer tent had its own pond in the middle but spirits were high and eventually the rain stopped and it looked like the race would be on. We saw the boats crew up and start off into the bay and we rushed off to the shuttles to get around to the viewing area. The skies were still very grey and it was explained that the wind had to be in certain direction before they could start, and although it would it needed to happen before 1440 due to television rights, so it was really disappointing when at 1440 is was postponed till the next day. We saw the boats sail at some phenomenal speeds but they
were not racing and by three o'clock it was a glorious day. 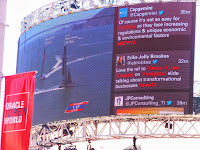 Oracle did honour the tickets all through OOW but unfortunately I never had the chance to go again I was too busy, but the races were shown on screens at the event, and I was at the Oracle Women's' Leadership event during the final were we watched live. Well done Larry.

And thank you Pythian for the America's Cup Jacket I won from you last year, very popular now. 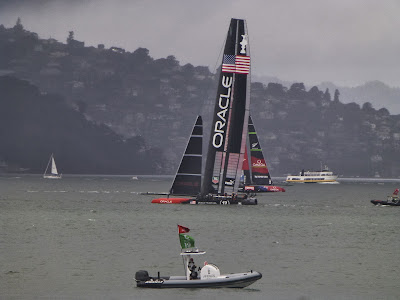