I wrote a lot about these before the event, and gave statistics based on pulling it together.

On the day, I always worry, will the technology be up to it? But most of all will people turn up for it?

This year, Oracle 'hijacked' User Group Sunday with 'complimentary content', and then the session before us was moved with just 10 minutes notice because one of these sessions had a larger number of pre registered delegates.

Anyway the room was much smaller than the last few years, and I do recognise that the Moscone refit has an impact on most sessions. It held about 100 so hopefully would be OK. 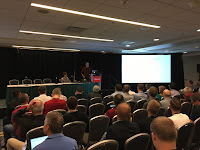 The DBA session was pretty full, these were traditional sessions with the odd 'web logic' thrown in good measure.

@oraclebase has written a good blog about the whole day and produced this excellent video which covers both sections. The slides are on the #oow17 portal if you are interested.


We like to have a countdown clock and in the past have borrowed one from Graham Wood, but then I end up carrying it around the conference looking for him. Now I am using a tiny, portable one go my own and used my mobile phone as a timer and projected it on the ceiling. However one of the speakers kicked the socket and the connection went loose so for a few short talks we were timeless.

The second session from the New Developer Champions had less of an audience which really disappointed me. This is a new advocate community and people should be more interested. 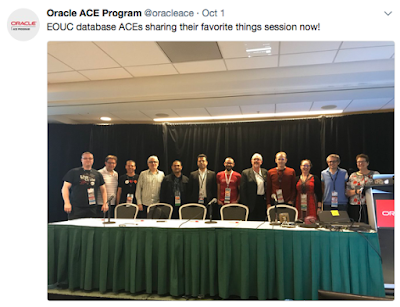 I asked Tim Hall to kick off the session by explaining what the program was about, and I loved his summary. These are existing, traditional advocates from either the ACE or JAVA communities, who are now embracing some other tools in their worlds.

I found these sessions particularly interesting and several of the speakers in both sessions were highlighting their main conference sessions later in the week. I like that, and may use that as the theme for next year. Come along and see 5 minutes on all of the EOUC main sessions and choose the ones you want to follow up on. It may surprise you.
Ralf Koelling for the idea and timekeeping.