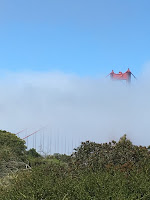 As promised I kept up my tradition of a fun triathlon.

On the Saturday before Open World, many people take the opportunity to cycle the bridge, there is actually a group arranged by Bryn Llewellyn but I know I couldn't keep up with them, so I like to go off with just one or two people.

Fiona has never done the bridge by bike so we decided we would have a go. Fiona has just run her first half marathon so should have been much better than me, but she also had blisters so that probably equalled us out. 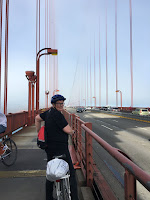 The day started quite cold but the sun soon came out to warm us up and eventually burn off the fog. But a photo without fog would not be right.

I also managed to do a little time lapse photography with my GoPro attached to bike. Not brilliant but is a record of what we did. 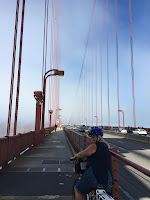 We started by getting a cable car to Hyde Street where we collected our bikes and then we cycled slowly along the water front, after purchasing tourist sweatshirts as we felt the cold (and then never wore them, in fact actually getting sunburn). We stopped for coffee under the bridge before cycling up through the park, over the bridge and down to Sausalito where we had a much deserved Italian lunch before getting a ferry back to San Francisco. Then we had to cycle back to Hyde Street. I guess it was about 12 miles in total although we may have pushed bikes up the hills about 3 miles. 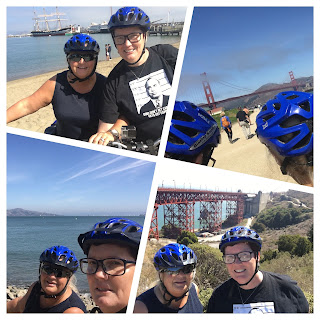 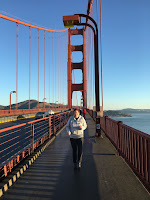 On Sunday it was the bridge run but I am not a runner and I like several others went up early to walk the bridge. Uber has proved pretty useful over the past few years but this year Lyft were partners with OOW, and were giving new members 2 x $15 trips, so travel to and from the bridge was free.
Monday morning I had a meeting with the head of HCM, but not before I had my 'swim in the bay' my favourite part of the triathlon. 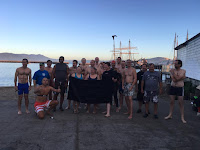 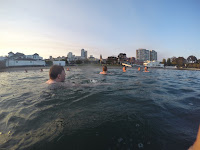 This was the 5th annual swim, sponsored by Oraclenerd and Portix, and OTN came along with doughnuts as well, although I had left by the time they arrived for my meeting. We were given towels to celebrate and I think this year it was quite warm , an almost balmy 16' C. Most people this year gave a real attempt at swimming. 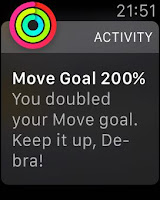 I love this 'triathlon', time to see lots of friends and do some exercise at the same time. In fact my iPhone told me I was 200% of my daily target all week.

Back to my main OOW16 page: