Last weekend I flew to Israel for the 3rd IlOUG tech days. I have been to Tel Aviv twice before but for their business days, more normally suited for a functional apps person.

I have met Ami Aharonovich many, many times he is the ilOUG president and a very active member of EOUC and IOUC, and way back at the last OOW he asked me if I would be interested, as PaaS4SaaS overlaps into technology.

The conference was held on Monday and Tuesday although I had to leave early on Tuesday to get to the OTN event in The Netherlands. This was also a bank holiday, school holiday weekend and flights were either non existence or beyond expensive. I was actually able to fly via Easyjet, a bit complicated as they are point to point (no connecting flights, no check bags through, no liability) so a lot of willing things to go right and finger crossing.

I flew from Belfast to London and then on to Tel Aviv. My first flight was delayed an hour and I tweeted that I hoped it didn’t get any longer as my connection in London was no very tight and they promptly responded by by delaying the 2nd one two hours. I didn’t mind it took the pressure off me, but I was to meet Maria Colgan at the airport, as I was expected to be less than 30 minutes before her. Being a try friend Maria waited. We arrived at the hotel quite late but the place was quite lively, there was the Madrid Derby Football match on and the Israelis love football / soccer. A couple of drinks later it was off to get some sleep. 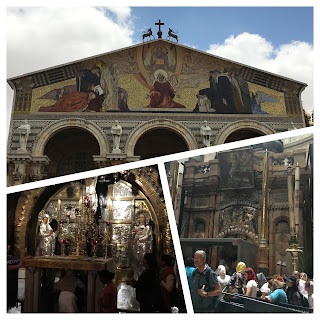 The Sunday iLOUG arranged a tour of Jerusalem. I did this on my first visit to Israel, and we had the same tour guide Ika Schweitzer. Oren Nakdimon from the IlOUG board, who was a speaker for OUG Ireland 2016  drove one car and Ika the other. Maria and I were in a car with Oren and Keith Laker from Oracle who also spoke in Ireland. Oren was not familiar with this part of Israel so I tried hard to remember what I had been told by the guide about the journey and think I did pretty good. For part of the trip we did get the commentary piped into our car over the phone and I was really impressed, although Ika said it wasn’t intentional he had forgotten to cut off the call! Still it worked for us.

We stopped several times for photo and talk breaks. If you want to understand biblical history, place people and places and understand more modern history of Jerusalem and why it so important to Jews, Christians and Muslims alike, I recommend Ika – however every things comes at a price, and we had to listen to what happened when he took Larry on a tour.

I am a Christian and the tour was beautiful and special, I said the first time I found it somewhat commercialised as a pilgrimage and it is, but was not as busy by far as it was that time. Thank you iLOUG, many people dream of the opportunity of visiting and I have had the privilege to do so three times now.

On the way back to Tel Aviv we had the most wonderful meal, the eight of us were joined by Ami, the four in our Car, Ika and his passengers, Bjoern Rost, Gustavo Gonzalez from Argentina and from Ilmer Kerm from Estonia. 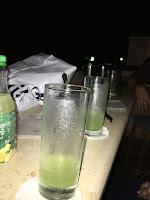 Back at the hotel Bjoern and I were keen to put operation cocktails into action. In Hamburg where Bjoern is from, they have a special cocktail, Gin Basil Smash, which traditionally Bjoern makes for speakers in Kiel as part of the OUGN event. This year Bjoern was not able to keep the tradition up much to the speakers’ disappointment. However a few weeks ago we were at a party in Copenhagen and Bjoern bought his cocktail kit and made them there. A plan was then hatched for him to make cocktails at an event in The Netherlands. As Bjoern was on vacation before this trip, I took home from Denmark the kit and bought it to tel Aviv and he bought Gin on his journey. Maria, who grows her own lemons in California, had just to bring a couple with her. Unfortunatly she let us down and had them confiscated from her hand luggage at SFO by an Israeli security offier who could not understand why anyone would try and bring lemons into a country that produces them for most of the western world! So we had gin, and most of the ingredients, having asked for a whole lemon at breakfast (tip – if you have weird or diva needs, make sure you have top status and nothing is too much trouble). All we needed now was ice, and since Maria had chatted up the barman the night before he gave us a large bag. We made our way out to the beach to discover it was closed but we found the pool bar which was closed (pool was empty) so we set up stall there and the cocktails were set. What a wonderful way to finish off the day, great friends, great personalised drinks and sitting in the warmth looking out over the ocean.

The conference itself was held in a movie theatre complex on the outskirts of Tel Aviv. We made our way there courtesy of Uber, which I am such a fan off, no currency needed, no worry about them taking credit cards and 100% surety they will go where you need to go. The cinema was also fantastic, we had 3 theatres in the VIP area, where the seating was not only tiered but first call, reclining sofa like chairs with footrests. Also you couldn’t leave the room from the rear so the audience couldn’t leave, or rather they could like I tried to during a presentation by Mark Rittman and he had great delight in embarrassing me! Thanks dear.

The theatre layout also meant you could really interact with the (captive) audience and I had so many really good questions and discussions in my PaaS session. The food was also excellent, and if I lived in Israel I would happily be a vegetarian. I kept thinking I wanted to pursue this setup for UKOUG, I knew Devvoxx did this really successfully and the AV is far superior than anywhere else I have been. I thought the general area would also work really well for exhibition and for keynotes you could just project into several theatres. However the problem here and I suspect most movie houses is that come early evening it went back to being a public movie house and all sign off us was gone by 5pm.

I had the most fulfilling day, as well as an amazingly interactive session on PaaS I also got to discuss the Oracle economy digital disruption which is always a learning session for me as I learn more and more examples. I also had several great debates with fellow speakers over Cloud multi tenancy which means completely different things to me in the SaaS world to system architects and may well be the next white paper I write. 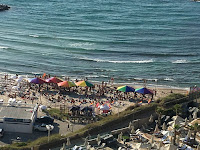 When we returned to the hotel Maria and I went for a walk along the beach, bare foot in the sand, well you have to don’t you? We also HAD to taste the rum and raisin ice cream whilst soaking in the beach life. Then we met up with the other speakers, now expanded to include Mark Rittman, Christian Berg and Hans Viehmann and went to the historic area of Sarona for another amazing vegetarian meal in an old olive house. The visit was preceded by a video of the building’s history, that plus Icar’s commentary on Sunday confirmed that the British are seen very differently than we believe is the case. Still it gave the germans something to laugh at us about. 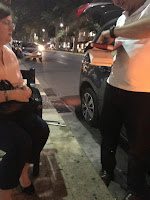 Afterwards many walked back to their hotels but Maria, Keith and I accepted a lift from Ami. He had parked nearby on a carpark overflow area which was really just waste land and unfortunately, just 5 minutes after we started out he recognised he had a flat tyre. At this point we discovered that we made a pretty good team, engineering at its best as we went looking for a spare wheel and how to tackle this modern car that appeared to follow no standard rules. But once we had resorted to the classes RTFM, we were good to go and Keith proved to us just how useful he is to have around. Chaging a wheel should be easy I ma sure you are telling yourself but without a video, and a manual that was written by software author on his day off you will understand our initial predicament.

So it was a late night but a great day. A perfect trip and I just want to thank Ami and Oren and the rest of the board. I loved it, I learnt and I made many new friends and contacts. The perfect recipe for a user group event.