My mind is split on the DOAG, I love the conference, I love so much about the event itself but I am so jealous of their facilities.

People attend the DOAG and then they say to me 'why doesn't UKOUG do this? do that? DOAG does' 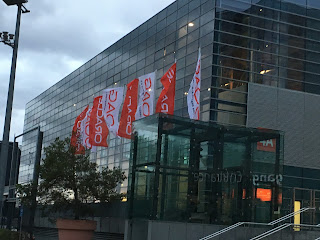 The UK has lots of conference venues, but very, very few that match the requirements of UKOUG. We need a large plenary auditorium, many, many breakout rooms, space for vendor exhibition and space for all the off piste things going on. There are probably < a dozen buildings in the UK that meet that criteria but the bigger venues refuse or make it cost prohibitive to take a subset of their facilities which leaves us with even fewer to use. 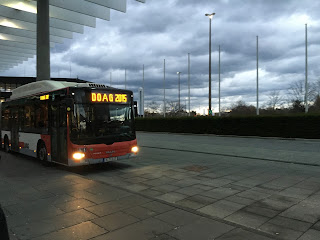 This lack of venues also makes those that are available expensive, and although we drive a hard bargain they are not subsidised the way many in other parts of the work are, which again makes me very jealous.

The DOAG hold their event at the Nuernburg Convention Centre which is a little way out of the city, but very accessible and the train fare is free for convention delegates, and they even have a DOAG shuttle from the train station to the front door. The hotels are all in the centre of town with so much going on.

The building itself it a spiral around a main atrium and the exhibitors are spread out around the walls, so delegates are walking past them all the time.

But probably the thing that I am most jealous of is the catering, not only can people sit down (a big compromise we have to make), but they sit in restaurants that open over a period of time, so DOAG don't actually take lunch breaks, delegates chose when to eat.

Having said everything that makes me jealous about the DOAG, it is a great conference experience.

UKOUG is an amazing conference despite all the venue constraints, the content is amazing and the volunteers are so passionate. Hope to see you there.