Once a PeopleSoft User.....

The HEUG are an industry based user group will a global membership but limited in person reach within the UK. There is overlap with the UKOUG Education & Research SIG but not too much, the HEUG focuses on the software solutions for education establishments.

Both HEUG and UKOUG are members of the IOUC and that relationship is explained in my earlier posting. The regular coming together of groups and sharing what they do at the IOUC summit, has created the respect for each other. One thing it introduced was the promise to understand where groups play in the same arena and to ensure that any plans here are openly discussed to avoid problems. So when the HEUG decided to hold their EMEA conference they reached out to me as President of UKOUG. We discussed how it would work and timetabling, I have already said the content was not so much an overlap but the event could have clashed with events we have. We then also discussed mutual opportunities to cross promote etc. 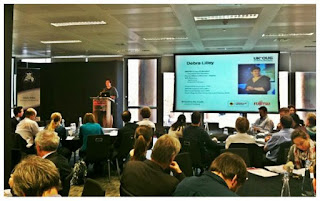 During these discussions I was asked to give a keynote at the event, to encompass what users and usergroups working together can achieve. I was really honoured to be asked and readily agreed. However by the time the event was in final planning stage I was no longer president of UKOUG so I checked they still wanted me. They did, they wanted a look at what had been achieved and it was not only my role within UKOUG but also my leading of the IOUC Product Development Committee that they wanted to hear about. Additionally Fusion is also just as relevant to Higher Education and my ACE Director knowledge was wanted they wanted to tap into.

When I put together the presentation, I actually found it a little sad. Having stepped down as President I will no longer attend IOUC Summits and this exercise forced me to look at my personal contribution and I will miss it. All volunteer communities are only as successful as those who volunteer to steer and since I stood down as PDC leader in January (it really was time for new blood), it has through no individual’s fault lost its direction and appetite. This could just be because of the maturity of the products but I think the lack of me nagging the group is also a factor :)

Anyway when I stopped crying into my laptop, I concentrated on the positive things that we had achieved.

“I love to hear a choir. I love the humanity... to see the faces of real people devoting themselves to a piece of music. I like the teamwork. It makes me feel optimistic about the human race when I see them cooperating like that” Paul McCartney.

Then I connected with the audience by picking out the sizable contingent from N Ireland and sharing my story of being an accidental Campus Solutions user. My daughter did her first year at Derby University (also in the audience), but was on a internship with the Australian Outward Bound School when results of her first year exams were available. She had no Internet access so talked me through how to access her records at the university and I was met with the ‘Welcome to PeopleSoft’ screen.

I concentrated on the achievements of the PDC which the HEUG were an active member of, especially in the early days:

This was the blueprint for the UKOUG Fusion Council which is one one the biggest projects and most successful.

Over the 5 years we achieved as a collective

•       Quarterly Calls with Oracle development ever since inception , Jesper Andersen, Cliff Godwin and then Steve Miranda as it moved through its maturity cycle
•       White papers on Fusion Content (HEUG & UKOUG)
•       White Paper and presentation to Global Apps Marketing
•       Worked with Markus Zirn VP on FMW4Apps including judging excellence awards to showcase use cases
•       Worked with Nadia Bendjedou on promoting her excellent and most read 10 Steps to Fusion whitepaper
•       Worked with Nadia on Applications Planning Tool to help users understand their FMW adoption
•       Education ideas and support – such as Soup to Nuts ODTUG successfully repeated at Collaborate and OOW events
•       Fusion Inner Circle membership
•       Customer Validation and UX sessions
•       YourPath to Understanding Fusion Applications

A lot to be proud off.

I intended to demo just the last of this list the FusionTube Map but actually I also got to demo Fusion FUSE.I arrived early and sat through the executive forum where Mark Artmstrong VP HIgher Education was talking about the campus solutions roadmap. He mentioned their was a FUSE app being written for Campus Solutions but only had screen shots. So I was able to show the Fusion FUSE to the audience in my session and show just how simple and useful they are. Thanks again to the ACE Fusion UX Advocates program


And I finished with an unashamed plug for our annual conference and wider community, after all behind each of those campus solution users, is a developer or dba who needs a home..

Thank you to Ted Simpson, Lew Conner and Jane Broad for the invitation and well done on an excellent event.
Posted by Debra Lilley at 20:31