In Japan this week I had some homework to do from the Oracle UX team.

I never stop talking about this group and how the science of Usability is being used to create the excellent UX of Fusion Apps. Well this doesn't just happen, led by Jeremy Ashley VP they have many members in the team who spend time with users collecting data, sharing their findings and refining the products based on this.

It isn’t just about Fusion Apps and one thing I am very pleased with is they have shared their findings as design patterns for the wider FMW community.

Fujitsu are members of the Oracle Usability Advisory Board and we participate not just to learn but to give our experience. At the advisory board to be held in the UK in December Fujitsu will be talking about BYOD and how it affects us and our customers.

Anyway I digress. One of my favourite UX characters is Ultan, based in Dublin, whose special interest is cultural, language and geographical differences. A few weeks back he posted this on twitter:

Ultan knows I teach IT in an old peoples home and lovingly refer to them as my silversufers. So when he saw Fujitsu Japan had launched a smartphone for the elderly he was really interested. When I told him I was off to Japan he set me the task of asking questions about how Fujitsu approached the usability study. My hosts at Fujitsu Japan arranged for me to meet with the mobile team, and came with me (which was much appreciated as the gentleman didn’t speak English), and armed with my questions from Ultan I set out to get the answers. 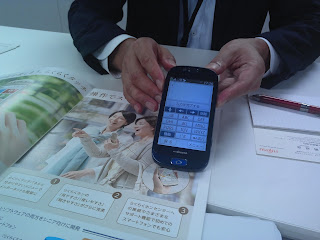 The phone is called Raku Raku らくらくホン. らくらく which means easy or comfortable, and I found another video explaining the features.

In Japan my silversurfers would be known as Digital Seniors デジタルシニア, I think they would like that.

My next question was how did they know what their audience wanted? The answer was that traditional research was not of any value, this generation have not all even been PC users so wouldn’t be able to tell you what they needed. Like Henry Ford said "if I asked them what kind of car they wanted they would have said faster horses". So they built a prototype and held some sessions with the relevant NPO (Japanese equivalent of Age UK). They showed them how to use the Smartphones and observed and listened to them.

This was really interesting to me. The program I got involved in with my silversurfers was started by Age Concern (now Age NI) 4 years ago and then we only had PCs. As I have introduced laptops, tablets and smartphones to the group they have embraced the concepts.

This Smartphone is based on android and have the UX built in at two levels. The first is the actual handset. You have to give very definite pressure to activate buttons, and they are illuminated in bright colours to show you have activated them. You cannot accidentally press anything. for instance digital seniors tend to grip them hard with their thumbs touching the screen.(watch the videos). But the apps which are pre loaded also need the android OS to be adapted. This meant working with google and means you can't download additional apps from the playstore, but the selection is very good.

Very popular are weather and a pedometer app, but there are also shopping apps and health apps. They also have TV and radio apps. The icons are large and easy to use, but the premise is not to remove functionality just make it simpler to use. Not having playstore is not a problem because many digital seniors can be very nervous about the security of downloading apps.

Other features are really important, digital seniors are prone to hearing difficulties and within age bands there are scientific sound ranges that work best. So when you setup the phone you enter the age and it sets these ranges. This has been so popular Fujitsu have added the functionality to other handsets. digital seniors also tend to speak with pauses in the sentences, the raku raku takes this speech and slows it down so that when it reaches the recipient it has no pauses but it much clearer. Double microphones to pick up voice better are also a feature as well as they wider used features included notice cancelling and voice recognition.

Interestingly the handset is not bigger than most Smartphones, but the physical buttons on the actual phone are larger and very easy to use; this feature was revised after the prototype which had a ring around the buttons for aesthetics, they wanted the functionality more.


Fujitsu are aiming this at the over 60s, they have made the move to mobile phones but Smartphones open up a lot more to them and the phone provider has a very special rate about 25% cheaper than the average smartphone contract which obviously helps with adoption, as does the advertising campaign headed up by a very glamorous digital senior who is a well known Japanese actress of a certain age.
The internet access and camera are near the top of the ranking features of the smartphone. Fujitsu have created their own social network, which they monitor, a concept I was initially nervous about but they explained the community wanted it, they feel happier that if they accidentally post something inappropriate and the example they gave me was innocent photos of the grandchildren in the bath, Fujitsu will take down the post and help them understand why. This network is not limited to raku raku users, so is growing but unlikely to go beyond Japan as it is only available in Japanese. No names are used in this network just nicknames.
There are many examples of feedback about the smartphone on the community, including many that talk about how the raku raku gives them access to the wider world and they don’t feel as isolated, especially for housebound users. This digital exclusion is what prompted Age Concern to put PCs into residential homes in NI. One disabled user talked about having a better life by being connected. Their posting talked about how much brighter and colourful the world is and now hear others point of view because of the community.

Raku Raku is also waterproof, many digital seniors live in rural communities that fish and farm so more likely to water damage. There has recently been an email to Fujitsu about a user who lost their phone in the sea at the beach and had someone phone it and they were able to find it.

It was a great session, completely different from what I normally do, and thanks to Ultan for the assignment. Keita-san and Kunihiko-san for taking me there and Fujitsu Mobile for talking to me about the raku-raku. I only wish they had them in the UK for my silversurfers, but they are talking to other providers so perhaps one day.
Posted by Debra Lilley at 18:11

Super blog Debra, and thank you for doing this! Digital iinclusion is a research issue for me and its part of UX globally too! Lets collaborate more like this!


A gold star on your copybook for that one (not sure how that localises!)