A popular thing to talk about at the moment is Customer Experience, and I posted recently about a CX event at Oracle and now I have a recent example to share with you.

Every year Fujitsu has their own conference, Fujitsu Forum held in Munich each November.
150 people including 85 customers travelled from London to Munich aboard the Fujitsu Flyer, or rather a chartered plane from Harrods Aviation. This was the only problem I encountered the whole trip, if you drove to Stanstead it was fine and they even had free parking but if you travelled by Train the Harrods terminal is nowhere near the main airport and the only taxis available were airport taxis who charge the earth. But from then on it was excellent.

Harrods have a brand reputation and that meant quality and service. I goggled the Harrods’ brand and discovered the best CX ever, delivered when they gave customers brandy to calm their nerves when they travelled on the very first shop escalator - but I digress……

No queues, personal service and time to relax. Fujitsu staff had luggage labels ready and check in was as simple as having your passport checked and ticking you off on a list. Security was normal but again only us so no stress. I was hoping for a plane marked Harrods but actually it was a Monarch Airways plane, but once onboard it was back to the Fujitsu Flyer which the headrests adorned with the Fujitsu logo, and each seat back contained the conference program, a welcome letter from our CEO and a copy of the award winning Fujitsu CIO magazine. From a company perspective it was cost effective to charter a flight and whilst on that flight the customers are a captive audience literally, but how the experience was delivered was what mattered and it was excellent.

I fly a lot and the lunch served was one of the best but I guess Harrods have better food than some of the better known airlines. And all washed down with some nice wine served on Fujitsu drinks coasters.

On landing just 2 hours later, buses waited to whisk us away to our own arrivals lounge complete with passport control. After collecting our bags off to more coaches to take us to the hotel. The coach I was on was for the local football team Bayern Munich but they had not even taken arrival of it yet.

On arrival at the hotel Fujitsu had their own desk and everyone had an envelope with their hotel key and conference badge, two more queues avoided. Excellent. It was also an excellent hotel right in the centre of the beautiful city.

Then after an hour to freshen up it was off to the Augustiners Brewery for dinner. 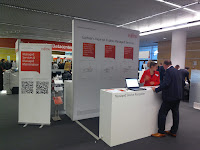 The next day after breakfast buses went as shuttles to the conference. In previous years I thought the conference was too hardware focused but this event did come out of  the Fujitsu Siemens partnership; however this year Services had a good showing this year, with Cloud and  Managed Services having large areas.

I was there in two capacities, the Oracle stand and as an ExpertTalk. 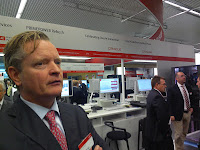 Oracle are a big sponsor and there was a great turnout for their entire stack. Our Global Alliance Manager was over from the US and our UK Alliance Director John travelled over with us on the Fujitsu Flyer. We had the Athena server with us out from Japan that we had on show at Oracle Open World. Great to show this partnership from both sides.

The ExpertTalks are something not necessarily unique to Fujitsu Forum but not something I have seen anywhere else. There were 30 rooms available throughout the conference where customers could select an expert who had declared the topics they would talk about. I offered Consolidation of Your Oracle Estate or Oracle Applications Strategy and I did 7 ExpertTalks on the first day. It is a great idea and something I think User Groups who have the space should consider.

Anyway after the first day it was back to the hotel for a quick change and off to the HofBrauHaus for another fantastic traditional Bavarian evening, this time with staff and customers from Fujitsu Nordics as well. 500 people all celebrating Fujitsu.

I sat with two customers who wanted to walk back to the hotel, so ever the good hostess I went with them but we got a little lost. I suspect my roaming charges will be great but in the theme of great CX, I the Fujitsu representative deferred to the iPhone Maps (I have not upgraded to iOS 6 yet); it was a lovely walk and a nice end to a great evening.

The next day was again spent at the conference and then return via the Fujitsu Flyer, however I had to make my way to Edinburgh for my next appointment so missed out.

Well done to Fujitsu Marketing, you did us proud and the CX was great. I know all the customers I spoke to had a great time and all seem to agree it was well worth the trip to find out what else Fujitsu does.
Posted by Debra Lilley at 22:58