A Quick Trip to Japan


On the journey out to OOW I received an email from colleagues in Japan asking if I would speak at the Oracle Days in Japan. As ever I felt really honoured to be asked, I love speaking and any opportunity gratefully received.

When I looked into what was needed I was a bit concerned about travelling all that way (13 hour flight from LHR) to give a quick presentation but I shouldn’t have worried, they had plenty more for me to do.

I arrived at my hotel opposite the Fujitsu HQ in Shiodome at about 12 midday, having left my house 20 hours earlier. It is a 13 hour flight from London (after my flight from Belfast) and then an hour by train into Tokyo. Luckily I don’t do jetlag as my first meeting was at 2pm. To be fair my hosts Keita-san, Kojima-san and Fujiwara-san only kept me a couple of hours to ensure I was happy with the schedule and content. 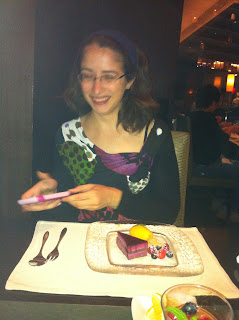 Then it was back to the hotel for a short nap and then Gwen Shapira who is currently working in Tokyo joined me for dinner. The Oracle Community is a family and there is rarely anywhere I go I do not meet up with someone else, what I call the Oracle Community Hug. I am blessed. Now Gwen is an oaktable member so I was a little worried about how technical the conversation would be but it was fun and we talked about user groups and their value rather than code (phew). Thanks Gwen for a lovely evening.

Next day started with coffee, and even if Starbucks is not your favourite it is the SAME all over the world so I was happy, I knew what it was going to be. Fuelled up I joined the queues to get into Fujistu. I love this experience, people greet you, open the elevators for you, greet you on arrival to your floor, at every opportunity. This is great customer experience.

The day was a number of meetings for information exchange. The first was with the Oracle Japan EPM team. We talked about Fujitsu use of Hyperion and about its wider adoption in both EMEA and Japan. We also talked about its use in Fusion. The second session was with the Oracle Japan Fusion team and they told me about their customers. The first Fusion Customer in Japan went live in the summer and they have 3 more in the implementation phase.

The final meeting of the day was UX homework, which I cover in a separate posting . Thank you Keita-san for arranging this especially as it wasn’t in HQ and we had to travel to the World Trade Centre where Fujitsu has a customer centre.

OAUG Japan are a great example of a user group that reaches outside its own resources to ensure content for their members and Fujitsu are of course members locally. I have met with them at US conferences and the IOUC summit many times and last year I was in Japan before the OTN Asia Pacific tour speaking at the InSight Conference and the OAUG Japan Board hosted a dinner in my honour. 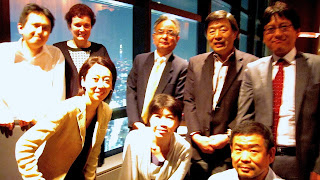 I mentioned on facebook I was going to Japan and Ryutaro-san who is a facebook friend told them I was coming over, and they did it again. I am so humbled by this group and their hospitality. We went to the sae restaurant as last year, on the 42nd floor overlooking the fantastic Tokyo skyline. On one side you have the Tokyo Tower and the other the new taller SkyGate tower. They wanted to know more about Fusion and I ended use demoing Fusion Mobile at the table (never one to miss an opportunity, and it was my 2nd of the day as I also showed it in the meeting earlier with Oracle and Fujitsu). Thank you Abe-san for the invitation and to your board for a wonderful evening and the lovely presents. 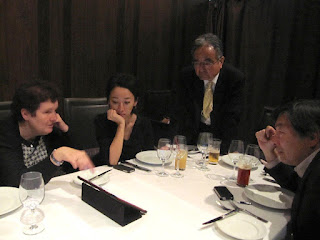 Wednesday again started with coffee and Kojima-san escorted me through the subway network to the hotel where the Oracle Days took place. I cover the actual session here but do want to mention the Oracle Community Hug again. At dinner I sat next to an OAUG Japan board member who is a PeopleSoft customer. He apologised that he could not attend my actual session as it clashed with a PeopleSoft roadmap session being given by Oracle VP John Webb. Now John Webb and I share (almost) a birthday and both (funny that) reached a significant milestone this year. I had no idea he was in Tokyo (although I had an agenda only product names were in English), so without this information I would not have known to go find John and say hallo.

Straight after my session it was back to Fujitsu HQ for more meetings, this time with the wider Oracle Applications practice and Alliances team. First I gave them a presentation on what I thought about OOW and its value to Fujitsu as sponsor and what I learnt (see here for my postings). I had already given this presentation to many stakeholder groups within Fujitsu UK and it is great to be able to share not only the messages but also help people in different parts of the organisation appreciate what the others do. 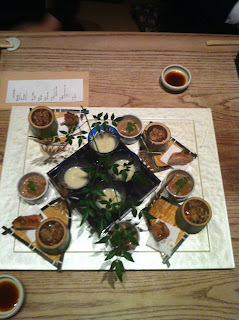 Then I gave the applications team a 2 hour session on Fusion Apps, from design concepts through to user adoption stories, addressed the ‘should I upgrade or go straight to fusion’ question (2nd time as OAUG Japan asked as well). I showed them GL and again got out my Fujitsu tablet to demo Fusion FUSE. (how many times can I thank the UX team for the advocates program, but thank you Misha).

Then at the end of another long day we went up again to the 42nd Floor (obviously) to another restaurant this time traditional Japanese. Once we had explained to the staff how difficult I would be (I don’t eat fish), we had a wonderful banquet, great company and again excellent views over the city.

Then up early for the long trip home,, where I had plenty of opportunity to catch up on blogs.
Posted by Debra Lilley at 18:12