2019 Kscope - My sessions and the joy of Mentoring

Last year Certus and Accenture had been working on a solution for government, part of our engage.gov offering.

The solution involves an extension to Oracle Cloud using both PaaS and Planning Cloud (PBCS).

I thought it would make a great  pair of presentations, looking at both the PaaS development and the PBCS components. We had partnered with Brovanture for the PBCS and I knew the consultant working on that component, Jazmin Ribeiro.

Jazmin was up for it, it gave us both a chance to understand the full solution and hopefully get a couple of sessions at Kscope where there were tracks for both development tools (albeit within the database) and EPM, where PBCS sits.

Jazmin had been to Kscope twice before (winning the ladies 5km race both times) but hadn’t had a session accepted and I know how difficult it can be to that that first one accepted. I hoped that by submitting the two together, both sides of the same coin, we would get accepted. So we submitted the story and waited.

I had my session accepted but initially it wasn’t a success for the PBCS abstract, however once I explained the ‘two for the price of one’ , ODTUG came up trumps with a session for Jazmin. They had a slot of only 30 minutes on the Monday which actually for your first time is quite a good idea. Then we found out our original session clashed with one from her colleagues, which she really wanted to see. I felt a bit like a diva asking if we could swap and then I realised that Connor and Alex had their SQL boxing bout that morning and that would be much better at the end of the day, which was when Jazmin and I had our slot, and they had no issue swapping. Thank you boys and Opal for your help. And her colleagues presentation was on integration challenges in the same project and they won a Kscope award. Well done.

I love encouraging new speakers and Jazmin is exactly what user groups need, someone under 30, and it doesn’t hurt to encourage women to speak either. The future of user groups depends on the next generation. However there is one problem, I approach new sessions by thinking about it for a long time, mulling over my storyboard and pulling together slides at the last minute. Jazmin on the other hand wanted to create the presentation and rehearse well ahead of time. Good discipline for me but outside my comfort zone as well.

First job was to bring in the solution architect and understand the whole picture. Rather than just two sides to the story there is actually three; The Cloud Apps (HCM), the extension (VBCS) and the PBCS, and of course don't forget the integration. We decided to create the presentation with the challenge, 3 component overviews and 3 more detailed sections. That way any presentation could be given to the correct audience, 2 overviews and the detailed content depending on what we were trying to share. 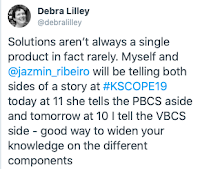 The VBCS component was originally a Proof of Concept created by John Ceccarelli in Product Management, without his help we would never of got this off the ground. Thank you John.

Then when we arrived at the conference we had a quick run through, checking out the room and the equipment.

The first of the two sessions was Jazmin and the PBCS. I had a cameo role doing the problem statement and the other two overviews. She was brilliant and gave a great presentation. There was a good audience and they all seemed very interested. I had high hopes some would stray over to the database track to see part II

However when it came to my session, it clashed with a live broadcast of EPM and Analytics announcements from Oracle and with a much reduced Development Tools audience, come start time the room was empty. I told Jazmin to go to the broadcast and when someone did turn up we had a one to one conversation about the presentation. Disappointing but the presentations are there for re-use at other events.