First I want to say Kscope19 was excellent as always and a big round of applause to Opal Alapat and her team for the conference. This conference is all about the community and has unraveled support from Oracle Product Management and a good mix of expert and customer stories.

I do however want to share my fustration  When I first attended ODTUG it was all about Development Tools but over the last few years it has become so much less so that I think for me, this year it failed to deliver on those tools. I am not saying it was a bad conference, quite the opposite and I am so glad I went, I learnt a lot about analytics which are becoming more pervasive in large Cloud Application implementations, and something I need to know more about.

When I first attended KSCOPE (not sure it was called that back then), there was a thriving Fusion Middleware (FMW) community. Forms and Reports still had a large following and ADF was a new product. I often talk about the lag between marketing and adoption of products and I think ADF fell into this category, it seemed a slow burn.

ADF was important to me, Fusion Applications were written using ADF and I expected that people would extend using ADF. Other products such as SOA suite were also covered here and the community had some great characters like John King, Lucas Jellema, Lonneke Dikmans, Sven Vesterli and Luc Bors, to name just a few experts.

One of the great things about ODTUG is how much support they have from Product Management and I loved how much they brought to the event. Delegates did attend sessions but as part of the portfolio, many were more interested in the SQL and the rapid growth of APEX, few people came solely for the FMW content.

When Cloud came along and FMW morphed into PaaS there was a new wave of products and ‘survival of the fittest’ meant it would take a while for the best to rise to the surface. Mobile was launched and that was very exciting, initially that used ADF and I thought it would accelerate adoption, but then they dropped ADF from mobile. PaaS was also difficult. Each component was fine but using them together was a challenge, in fact the ACE program held a hackathon at the AMIS conference to see how many we could use at one time and the PaaS ACE Directors would showcase this at the PaaS Forums for the next few years.

In the meantime the development tools track dwindled at Kscope and eventually is was consumed into the Database Track. APEX was growing and EPM became a large part of Kscope. I was concerned because I understood why something like Forms and Reports were on the decline but I felt PaaS was just starting. I missed Kscope last year as it clashed with something else (thankyou Kscope for giving us the dates for the next 2 years, it won’t happen again). My last Kscope in 2017 had very little PaaS content and from what I saw in the agenda there was even less last year, however this year with the introduction of an Emerging Technology track I thought it might be better.

When the content is down, there is nothing to excite possible delegates who would want this as their main track, so it becomes a self-fulfilling prophecy. When the agenda was launched, although I had my VBCS session accepted there were only two others. Mia Urman talking about it with E Business Suite and a session by Shah Smeltzer one of the Product Managers. 3 sessions isn’t enough to make this sustainable. Both had audiences made up of people who wanted to know what the fuss was about, not people who had come to the conference for that specifically.

Recently there have been grumblings in the community about Oracle not pursuing ADF and I don't agree. Our world is at hyper speed, we talk about agile, the ability to try things and fail fast, or things that develop so quickly they are unrecognisable. Well that is true of the technology behind them, some will fail, some will morph and some will kick others out. Remember cassette tapes? Remember CDs? The struggle between VHS and Betamax? Oracle are now using JET based development for the refresh of the Fusion UX, so the extension tool of choice is now VBCS, and that today looks nothing like its original ABCS incarnation. That however is progress.

PaaS adoption is growing, I see NO Cloud Applications deal that doesn't have a substantial PaaS component today, regional user groups are covering these but there is no global home today. It isn't just for SaaS customers, look at the rise of chatbots, digital assistants. Lots of case studies here are independent developments. And if you are a partner you MUST be part of the PaaS community run by Jurgen Kress, it is awesome.

However all is not gloom, I spoke to several ODTUG people and Kevin McGinley who will be the conference chair next year and there will be lots of thought as to what is included and how it is marketed. I would like to see something like a development solutions track, and yes I'm happy to help. 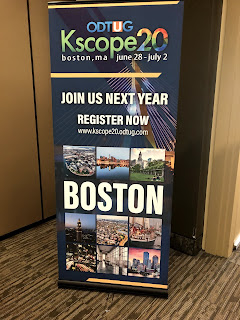 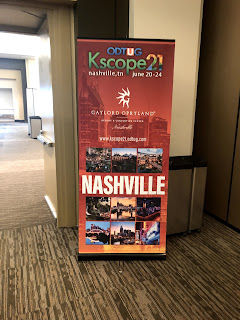