I Love My Fujitsu Tablet - Tales from OOW

I was so honoured to get the opportunity to demo the Fusion Fuse mobile apps at Oracle Open World. Initially I was using the presenters laptop so it was projected on the screen but when a peer was presenting another app, someone in the audience wanted to see them on an actual mobile device, "did we have an iPad" he called out. As I was following the demo on my tablet, I was able to hold that up and show him it working. "It's android" I said, "from Fujitsu". I was really proud.

Let me tell you a little bit more. As you know I work for Fujitsu. I may also have mentioned that 'I am not technical', however since Oracle bought Sun I have had to learn a little about the hardware as Fujitsu manifacture Sparc that is used in their M series. Fujitsu also manufacture laptops and increasingly tablets. At our own conference in Munich last November one of the most popular products was a waterproof tablet. Lots of people playing in a trough of water. 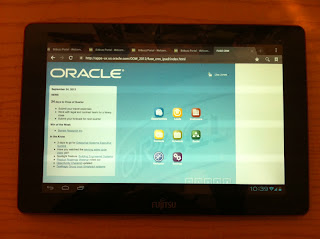 Recently we launched a new android tablet the Stylist M532, and I had the opportunity to use one for a day in our London HQ. It was so light, much lighter than my iPad and although I wasn't android savvy seemed very easy to use. So I ordered one and thought 'I like this'.


I travel; I travel a lot, so what I need is something that has great battery life and is easy to carry around. It is no good if it is in addition to my laptop, it needs to be instead.

I spent a few hours loading all the apps that I had on my iPad and was happy with all them, in fact TweetDeck and Facebook are in my opinion better on android.


On the downside, if you have a lot of music on iTunes you have to reload it all for android, but I don't so for me it wasn't a problem. What I do miss is the ability to create a screenshot. On iPad it is part of the device but on android apparently you need an app, and as yet I have not found the right one for me, but that is my lack of techncal ability showing and I have colleagues here looking for me.

At first the battery life didn't seem too great, if I use it from unplugging I do get 6+ hours of work, what I am looking for on a longhaul flight but if it sat in my bag overnight a fair bit had already gone. However that turned out to be because my email was set to sync every 15 minutes. I changed it to sync on demand and it got much better but switching to aeroplane mode before I turn off solves the issue completely; again probably not the easiest answer but it works for me.

The big test was Oracle Open World. Could I attend pre briefings and a conference for 7 days, take notes and manage the hundreds of emails I get each day just on the tablet?


The answer is simply YES.


First, I actually find typing easier than on my iPad, I think part of that is because it is easier to hold in my hand, because it is thinner and lighter.

The tablet is defiantly more attractive, perhaps this is because I am an evangelist and loved the Fujitsu red bevel, although my Oracle friends thought it was for them.

Email was great and I was even able to work well enough to file emails in folders (I use exchange) and I certainly didn't feel the need to shorten responses like I do my my phone.


I wrote blogs and notes on my tablet and as I said typing was much easier. I had invested in a generic stylus for my iPad especially for when I was on a plane, and to be honest that doesn't work as well on the tablet, but because typing is easier I don't have the need.

The most impressive thing I have to say was the plug. Please don't laugh but the power pack has interchangeable pins, nothing unusual there,and as a traveller ideal, but the magic is that you can put the pin plate in two ways, thus changing the orientation of the power pack. When you have many geeks sharing a power strip this was very popular. Absolutely brilliant.

My tablet has Mobile Data security protocols so I can use it for work email (don't ask me what they are, but for instance I cannot change time out times and must have a 6 character password),and I also use it for VPN, no problem on either.

Another thing it does which I love is that if I am connected to the Internet on one session and then later come back to the same wifi network  it will remember the sign in details so I don't have to re-enter. That was very important at OOW because the wifi was so poor you kept being dropped. In fact the poor wifi meant I couldn't trial tweeting as much as I wanted. It does have a 3G card and that also works well but I don't have one for the US and Fujitsu may love me but not enough to rack up huge data roaming costs, so I didn't try that.

I did have another problem with the tablet, on the stand it appeared that I could not use it and the power cable at the same time, but I mentioned that to a more technical colleague and he suggested I switch on the auto rotate. Guess what, it worked!

I have to disclose that I am not being paid to write this but if Fujitsu want to give me another tablet my daughter would love one :) #ILoveMyJob

Gosh, I haven’t finished yet, I want photos of that swivel thingy added

re: if you have a lot of music on iTunes you have to reload it all for android

There is an android app (Easy Tune Sync or something) that lets you copy songs and playlists etc all from itunes to android!