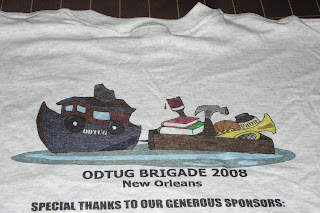 I've just returned from ODTUG in New Orleans and I will tell you all about it after the weekend, but I have promised to tell all about my personal crusade.

Then I realised my flight would not get into New Orleans in time to get the bus so I emailed Kathleen at ODTUG and she assured me there would be a later pick up. Oh I was ecstatic and told all my friends, but an American friend told me to be careful I wasn’t being sent on a ‘Short Bus’, so back to Kathleen, ‘No it will be a big yellow bus, just as I wanted’

When I arrived in New Orleans I got ready for my big adventure, went down for the bus and…. There was no bus, well a little biddy white bus but I wanted a BIG YELLOW SCHOOL BUS. There had been a mix up with the schools department and as it was a Saturday they were closed and we couldn’t sort out the issue. The main group 60+ had to go on public transport, who at least in New Orleans insist on taking exact change, poor Kathleen she needed 60 dollar bills and 60 quarters!

So in dampened spirits off I went to the school, but all was soon forgotten it was amazing, one of the benefits you get from conferences is making new friends, and that is not difficult when you all share the same blue paint in your hair. If it didn’t move you painted it, including I believe in one room the roaches. I hope the children enjoy what we did to their school as much as we enjoyed doing it. 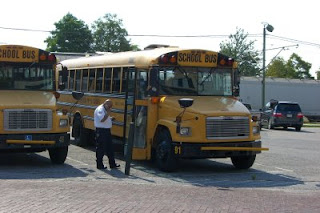 Back to my yellow bus, on Sunday the ODTUG photographer did a photographic walk of New Orleans and one thing he told us was if you want to photograph someone just ask, so when I was out for breakfast yesterday I saw – in a car park – a Big Yellow School Bus, at first I just took a photo from the other side of the road but I got brave, I am an Englishman abroad so we are expected to be mad, so I went and asked. Not only did they let me on board, but sit in the driver’s seat and pretend to drive it. The children definitely thought I was mad, but all that matters is I got to go on a BIG YELLOW SCHOOL BUS 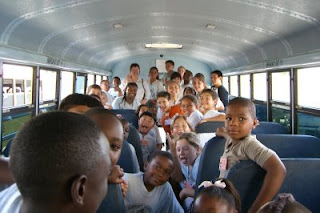