First week of December and it's UKOUG. Wonderful tradition and something I passionately look forward to every year. This year again I was conference lead for Applications, but also a board member so involved in the whole thing. 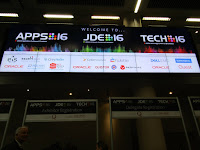 There were 3 conferences co-located, Tech, JDE and Apps, and the buzz at the conference is a great feeling of belonging. The committees put on an amazing itinerary and people can move freely between the agendas, which I saw a lot more of this year.

I am not going to talk about sessions, most speakers have blogged, but I will say I wanted to attend so many and failed. But I did try and catch up with many of the speakers.

What I care most about is the off piste stuff, not just the agenda, but everything else you get from conference.

Sunday is the now very traditional Super Sunday with the 'super geeks' getting more content and then in the evening the volunteers' reception. We have normally had the ACE Dinner on the Sunday which means I haven't stayed too long at this but by popular demand we moved the ACE dinner till Monday and it meant all the fantastic volunteers who are also ACEs were not pulled in two directions, and I had the opportunity to thank more volunteers in person.

Monday kicked off with the Keynote. First our President Linda Barker and then Neil Sholay of Oracle, who talked more about the digital world and the need to be data driven.

Neil spoke last year at the Tech conference and the feedback was so good we had a keynote across the 3 events this year. The turnout was amazing.

Linda also introduced us to Paul Fittons are new President elect. Paul told us a little bit about him.

Paul will take over from Linda next year and this is his opportunity to get to know the role in the run up to this. Paul spent most of the conference speaking to delegates, exhibitors and speakers, getting to know what he has signed up to.

Another speaker on stage was Laura Ramsey from OTN, they have sponsored our speaker awards for many years and this year also sponsored the Cloud Balcony and OTN lounge were people could try out and sign up for cloud trials.

Well done to all the speakers who won awards. I love this initiative, rewarding the best but more than that encouraging the new speakers.

Jennifer Nicholson who runs the ACE Program for OTN, hosted the ACE dinner on the Monday evening when nearly 70 guests enjoyed the traditional Thai meal.

The ACE program gets a lot of support from Oracle and Jennifer has to listen to all us ACEs moan about change. I hope she doesn't take it personally.

Tuesday morning kicked off with the Women in IT breakfast and I was pleased to see a few men attend. Each table shared what their organisations do, what they would like UKOUG to do and shared their details if they want to be further involved. There were lively conversations and we are going to facilitate speaking in schools, to get children especially girls, thinking about IT as a career really early.

Another great tradition at conference I love is the User Experience Team, and this was their 10th year at UKOUG. It is now so popular when I tried to book a session a couple of weeks before the event, they were full. Everyone who takes part learns so much about what is happening in Oracle applications development.

The party was fun and I particularly loved that Susan Duncan our Oracle chief liaison sang with the band. I had to actually get on stage and tell the audience, I don't think many of them recognised 'their Sue' as the professional singer.

Wednesday had a very different feel, with most people staying all day and the post lunch exodus was much less evident. I have seen lots of feedback for this. A result! 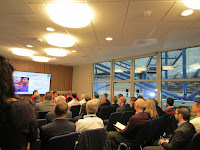 I sais I wasn't going to talk about sessions, but I got the chance to repeat the session I took part in at Oracle Open World, when my colleague Richard and I spoke with England Rugby on their implementation of ERP & HCM Cloud. It was wonderful and we had a very full room.

So as we start the post event process and start the planning for next year, I can say I loved 2016 and thanks to everyone who was part of it.