My next trip was for OUGN.  This is, one I have done before and I really want to support their growing apps community, unfortunately I was too late to get ACE funding so this one came at my own pocket (well with a bit of help from Airmiles).

OUGN is on the boat ColorMagic, and she sails between Oslo and Kiel. Internet is patchy and out at sea non-existent, but knowing that in advance makes it easier to deal with.

Traditionally there is a speakers' evening the day before the sailing. Here is the chance to meet the local community and the other speakers taking part. It seemed odd not to have Tim Hall with us this year especially as this boat means so much to us, but there were lots of other people lots of other friends both new and old.


The organisers sent a taxi for us the following morning to take us to the boat and we then had the keynote presentation before getting to our cabins. James Morle gave an excellent keynote on how the world of IT especially data is changing and I’m sure it gave everybody something to think about.

Then there were sessions for the rest of the day but I wasn’t speaking until the second day. The first evening late at night when the normal cruise guests had eaten we had an amazing dinner with different wines for every course. How anyone is expected to function the next day always amazes me.
The next morning I had my first session which was on ‘Are Cloud Applications ready and I had a full room which was really great and lots of really interesting questions. Cloud Apps are still very new in the Nordics, data residency has not yet been ironed out but people are curious and starting to look.

The boat then docked at Kiel in Northern Germany and you are able to get off for a few hours.  Here BjoernRost was waiting for us for what is the now traditional gin party. This may seem very self indulgent but actually the discussion was about arranging the next OTN EMEA tour. We were joined by others who also think of OUGN as an annual 'must go' event, Tim and Kellyn Gorman, Dan Morgan, and new comers like Gurcan Orhan 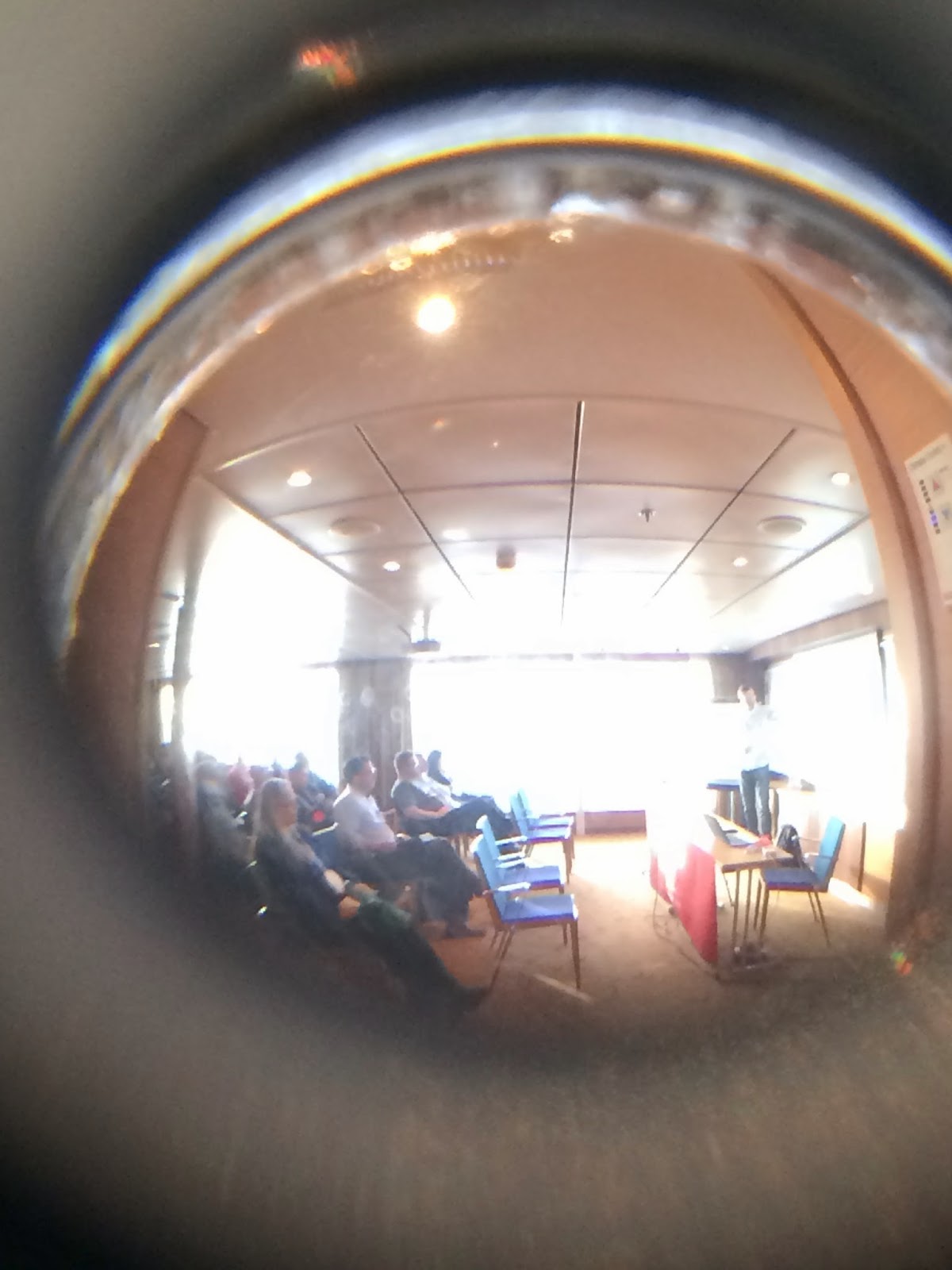 I wandered into town with Michelle Malcher who was over to speak from the States and then it was quickly back to the boat for my second session, the first outing of my PaaS4SaaS session. It went OK and I had good questions always my guide level but a few people looked lost as I started and I had this horrible understanding that it was too technical for the audience. Luckily I was able to switch into a more ‘why’ than ‘how’ mode and recovered. Not something I ever thought I would do.

I had intended to go watch Alex Nuijten in his session but got caught up talking to some delegates, they really are working hard on their apps community and I was pleased to be able to help. Having missed the start of Alex’s session I peeped in through the door and decided he was in full flow so I took this picture through the peephole. 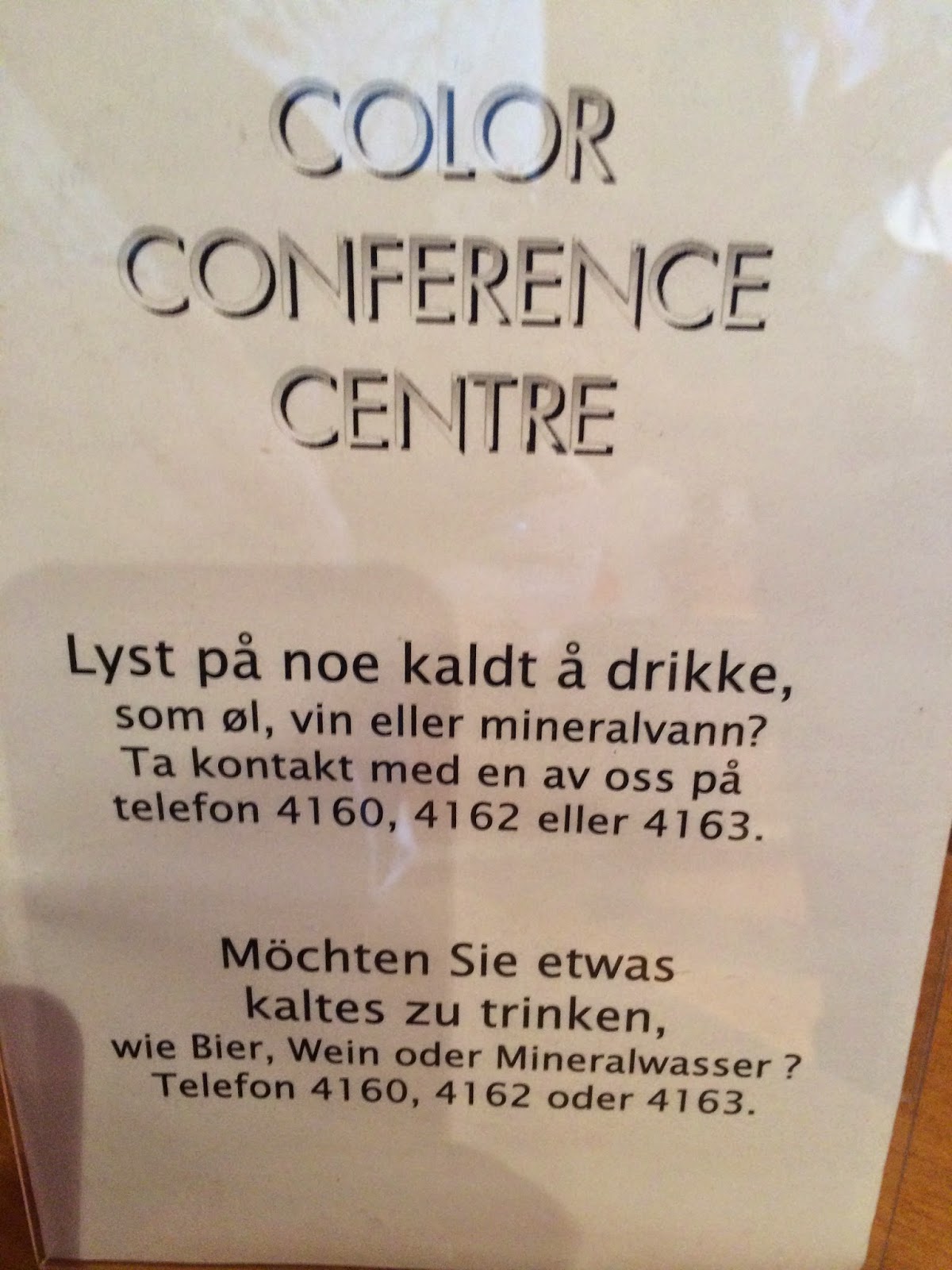 The boat is great, the conference side of it makes money and they are every well equipped (except for the already mentioned wifi), I loved the notice to speakers, which basically says ‘ if you need anything to drink, wine, beer or water, just let us know’.

The exhibition for the conference has grown over the years and was too big for the area outside the classrooms, so it was held on a car deck! Food at lunchtime was served here and it got quite a buzz. I was really happy I won an iPhone in the Cognizant draw, although Heli came out top she won an Apple Watch!

Dinner the 2nd night was not quite so formal and since we had a lie in the next day we decided to explore the ship. Having spent a few minutes playing lego in the children’s play room we moved on upto the adult playpit known as the disco. I cannot remember the last time I danced at a disco and a purist would probably find it hard to call this dancing, but Michelle, Alex, Roel Hartman and I gave it our best. I gave it my best until midnight and then left the rest to party on. 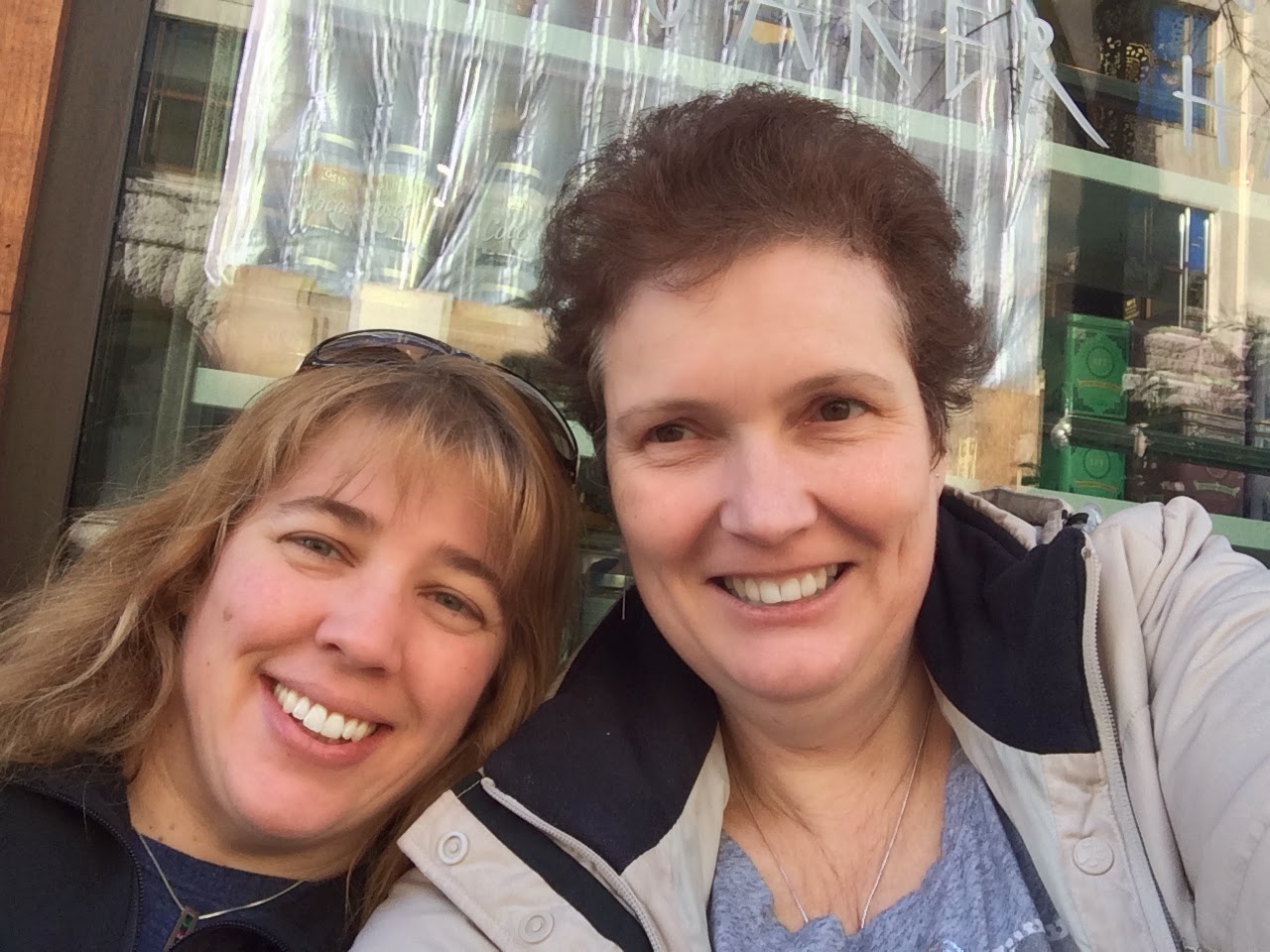 We docked the next morning and again the OUGN provided transport to the train station, most people had flights that day so just went to the airport but Michelle and I had all day to wander around Oslo, see the Scream (again) and then after lunch in the harbour we spent time at the old fort, before rounding off a fantastic day drinking coffee in the sunshine albeit with a blanket to keep warm.

I stayed a final night and then flew out Sunday afternoon, having spent the day working in the sunshine.

Thank you OUGN for another wonderful conference.
Posted by Debra Lilley at 20:23