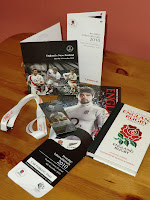 Twickenham stadium, home of British Rugby. Their strap line is The Twickenham Experience and this post is about two very different Twickenham Experiences.
I love Rugby, and last Saturday Oracle took me there to watch England v New Zealand.
I was very excited and loved the day. It was sad that England didn't win, but it was a good game. As always when watching the All Blacks the best bit was the Haka. 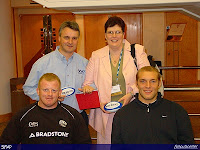 The day was really well organised corporate entertainment and my table had the privelidge of being photographed  with  Ben Kay, this was fantastic, because in 2003 when England won the World Cup Sysao brought a few players to the UKOUG conference in Birmingham, They were sponsors of the 5 Nations and had arranged it way before England won. So one day they were parading in London in an open top bus with millions and the next at our event. Here I am with Ben (and Toby Price) way back then.
Thank you Oracle (Andy Lawson and Sarah) for a great day out. 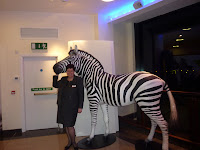 Then just 4 days later I was back, for the JD Edwards Conference Series Event. I had the pleasure of taking the Oracle Executives to dinner to thank them for their support of the UK JDE community. Unfortunately my great friend John Schiff (VP JDE World) did not make the dinner as he was stuck in Stockholm because of snow! But two cancelled flights and a re-organised trip later he arrived just 40 minutes before his session.
David Rowntree our JDE Director and David Alridge from Oracle kicked off the event. Lyle Ekdahl (SVP JDE) talked about the road map, and Mark Keever came over specially to announce a Business Accelerator especially for JDE. Gary Grieshaber talked about everything new and even about how JDE will work with Fusion Apps.
Rene Voogt our Oracle Liaison loved the event and made a special thanks to Lavinia from the UKOUG office for all her work. 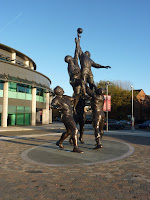 This is a community that has thrived since their acquisition, and Ronan mentioned this in the press call. We had great press coverage and then we received thanks from Mark Hurd who stated he is 'a big proponent of Oracle User Groups', the first time I have heard him say this since he joined Oracle. Life is good.

Rugby is about working together as a team, as is UKOUG.

The Twickenham Experience lived up to its promise.