My APEX and ATP Journey

The big message from OOW was the Always Free Autonomous Database. Not normally of interest to me but I thought, I love the APEX community, (they were my first call out on community appreciation day in 2016). Although for me, it isn't often used in my SaaS world, I might I might just give it a go.

PHASE 1 - Action rather than just idea

Think about it and commit via twitter, if it's on the web it is real! 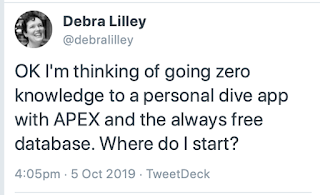 Outside of work my biggest love is Scuba Diving (read about it on this Kscope link)
I keep my scuba dive log on a spreadsheet (and in written logs) but would love an app. I tried with VBCS and had some success but not the wonderful app I wanted.

When VBCS went less citizen developer I gave up, I don't have the time to spend working everything out and then a trial account expire. Now Oracle was offering a free cloud database, I thought I would try again and see if APEX is as easy as everyone says it is.

CHALLENGE 1 - where do I start?

Reach out for help. Thank you to all those of you who gave advice on twitter and for Roel Hartman who offered me a call.

Started well but then got this error 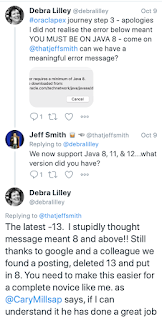 So stupid, foolish me believed the message meant Java 8 and above. I installed the latest Java for IOS and continued to get the same message.

Eventually this google search gave me a clue that actually it wants a specific version of Java. I have to say thank you to my colleague Ian Staff who helped me here.

Eventually with more help from Jeff Smith, who I may have blamed for the rubbish error message, I got SQL Developer working. 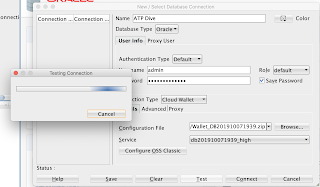 After a few frustrating attempts to move on my wonderful colleague Julian Dontcheff explained that I wouldn't be able to do this whilst connected to work's VPN, unless it was whitelisted. Simples - now it was working. I even ran a little SQL query. 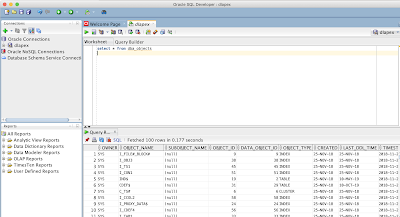 Creating an APEX workspace and project was simple enough although by now I had 3 usernames and passwords (each of which had different password rules) and slightly confused, but onwards I went.

Using the 'create from file' method I tried to create my first table and failed, again I reached out the community and Lonneke came back, but by then I had tried again with the 'Cut & Paste' method. 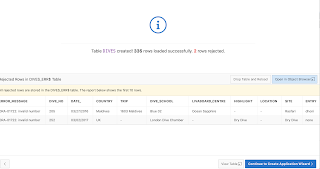 First attempt had an error but helpful info so was able to amend and retry:

Amazing, I had my first table application. Using interactive reporting I did some graphs. 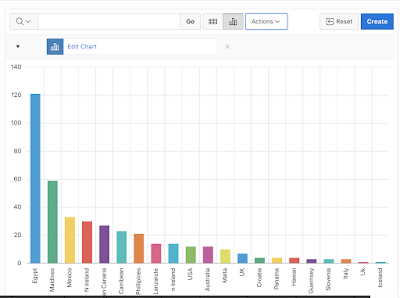 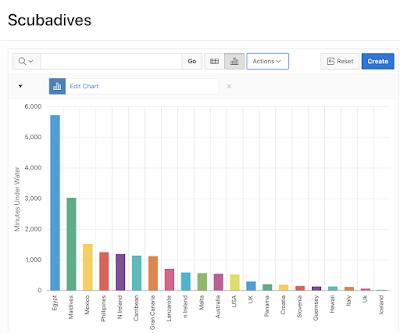 As you can see I have a data issue with 'Uk' and 'UK' dives and to be correct that should say 'GB' but simple enough to fix.'

This is how far I got with VBCS. A single table app. It worked well and I was able to create web app and enter data, but what I really wanted was lookup tables. I did try once with Susan Duncan to try creating the lookups and replacing my data with IDs but failed, although I never pursued it any further.

Within APEX, Roel told me it would suggest lookup tables and it did.

So I tried my first lookup table and although that appeared to work I then got a numeric error on the main table.

I have deleted that app and got back to where I was. As I am using the Always Free ATP, this can wait till I have more time (or more likely when at a conference with APEX experts - you are warned).  So come back for the next episode.

In this offering you have to use the database once a quarter to keep it, but I also learnt if it isn't used in a 7 day period the database is stopped, but pressing the start button on the cloud console sorts that. Funny story, when I first started working with Oracle back in 1996 I had to bribe DBAs, normally with chocolate to do things like this for me. now it is AUTONOMOUS! But on Wednesday I was sharing this with the technical teams inside Accenture and discovered one of those DBAs now works for Accenture in Toronto. A small world.

Now I'm off diving to add a few more records to the table!

This was then covered in Forbes Magazine