Connor McDonald and Chris Saxon are Developer Advocates in Oracle. Their role is to engage with the community and encourage them to use the Oracle database. They are also 2/3rds of the famous Ask Tom with Maria Colgan, In Memory PM, being the third

They work closely with both the ACE program, who are non-Oracle, Oracle advocates and user groups who bring the users together. In fact, they often represent the Oracle side of the ACE program, Chris hosting the ACE dinner at UKOUG and Connor giving a talk on the program at Sangam18, just two examples. I am not a database practitioner but have always been aware of their presence and impact, and over the last few months have watched them more and more and how they add energy to so many events.

I’ve known Connor for a long time, in fact at one time we both worked for Fujitsu, albeit at different ends of the earth. His presentation style is legendary. Hundreds, and I mean hundreds of slides, that tell a story simply in a rapid-fire approach. He makes it look simple, but I once had the privilege of observing Connor create a presentation whilst staying him in Australia, and I promise the simplicity comes from an equal number of hours of preparation. More recently he has added videos to his repertoire and they are just so entertaining and deliver that community message so well. My favourite is still his UKOUG 2017 video.

Chris is someone I only met a few years ago, and a very different character to Connor. At first, I thought he would be over shadowed by him, but that was unnecessary, Chris has developed his own way of engaging and often works with ACE Directors on entertaining and different presentations that are still packed with knowledge sharing.

At OOW this year Chris and Alex Nuijten came up with an idea to have a competition between Oracle and ANSI SQL standards. Not a simple compare and contrast presentation, or even a debate but a full-on sparring match. Several times I saw them in the hotel lobby or sat in a corner discussing the various attributes they wanted to highlight. I asked what they were up to and they shared their vision of an actual boxing match with me and I loved it and persuaded them I could make a great ring girl walking across the stage with the round boards.

The first match, and I do hope other user groups who invite them to repeat the session, was at the DOAG. They came on to the stage, complete with boxing gloves and a typical fight build up complete with voice over, provided but Bob Rhubart. It is this attention to detail that sets advocates apart. 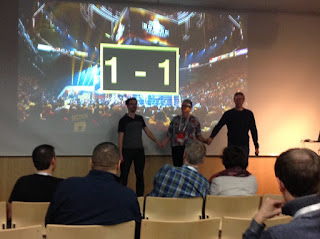 Their arguments were well rehearsed but flowed so naturally, each one backed up by a worked example. This was serious education. I won’t tell you who won, because I want you to see it, and learn from it. They did have a championship belt for the winner, but it wasn’t of suitable quality, so another reason for having the season repeated is I made them a new, more fitting prize. 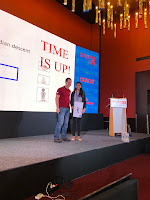 More recently I was at Sangam and both Connor and Chris was there. This is a conference of very long days and energy giving sessions are a must. Connor did many but the one I loved was to kick off day two he had a quiz. Everyone had to stand up, and then he asked a question, with 3 possible answers. Each answer had a gesture, like hands on head, arms folded or hands on hips. You had 3 seconds to decide on your answer and adopt the pose, then if you were wrong you had to sit down. The questions continued until a winner was found. The questions ranged from Oracle related, to database questions and a good sprinkling of fun, like where did the ‘Scott / Tiger’ password come from on the database?

It was such fun, and we have several rounds and I just love the different ways people attempted to cheat. Again, it looked simple, but you can guarantee a lot of work went into that. 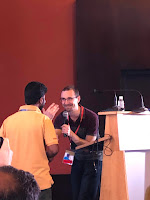 Chris finished the event with a card trick. Again, I won’t spoil the details for those who haven’t seen it yet, but he got someone on stage to pick a card in a SQL statement and then correctly ‘read’ the volunteers mind as to the card. Very, very entertaining, with a lot of work into the presentation but with an education sound bite as well.

You may think they have the ultimate job, travelling the world and playing at SQL, but I promise you there is a lot of work happening behind the scenes. But the energy they bring to their audience, the education they deliver and the love of Oracle they engender to their followers is a credit to their role.