Although I am no longer UKOUG Board, I did still have responsibility for Apps 18. But you don’t do this on your own, you have a great team behind you.

The main priority of the team is to deliver great content. After the for papers, and paper selection day we were quite happy with the agenda. However, as the weeks go on there are inevitably cancellations and then we have gaps to fill. This year it appeared to be a bigger problem than normal however the range of sessions actually delivered were I think, good.

This year we tried to concentrate on Thinking about Cloud, Living in the Cloud and Staying on Premise. I felt we didn’t reach as many cloud end users as we should have, but we did have a good number. I was very impressed with the on-premise communities.

In the run up to conference numbers were slow to grow, and just a week out I was very nervous, but then at the last minute, numbers increased, and I was happy that there were enough to make the sessions interactive and allow people the networking usergroup provide so well.

I was once told that the reason you should never organise your own wedding is because you spend the whole event worrying, and you notice every little detail that goes wrong. I always feel like that at UKOUG events although it was not as all encompassing this year as when I was on the board.

The 3 board members are all very involved in the event, all as speakers but with other roles as well. Neil Chandler for Tech content lead and I think he and his team delivered.

Martin Widlake spoke as president in the opening session and gave a great explanation of how UKOUG was changing. He was an engaging presenter and his passion showed. My only criticism was he forgot to explain the plans for Apps next year and he told me that himself afterwards, but there will be more communications. 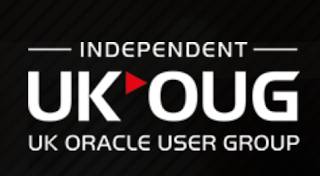 I was especially pleased with the addition of ‘independent’ to the logo. Whilst still on the board I led the 'Mission and Values' preface into Project Reach and that was the top recommendation from my group of volunteers.

I also attended a session on Super Sunday from Brendan Tierney. Again, we don’t normally cover the same subjects but he was talking about Machine Learning and I had seen Heli’s session at DOAG and wanted to learn more. I found Brendan’s a great session to build on that and loved his approach. He said people learn better from example than by fact and I would wholeheartedly agree. And the fact he served Irish Whiskey just topped the session.

I must congratulate the board, and Karen with her entire team for the event. I and everyone else really enjoyed it.