Sleep is a wonderful thing and in a much better frame of mind, we managed to get a taxi to the university for the event kick off. Once we arrived I was very impressed with the facilities, which included sports halls, pool, stadium etc. of almost Olympic quality. 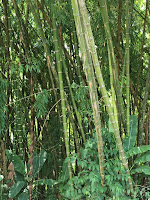 The university appeared to be set in a bamboo forest which is very prevalent locally, in fact we also saw a toll booth the next day made from bamboo and most of our hotel was decorated that way.

There was a large auditorium and another hall. There were just two streams, one with translation and the other in Spanish. I had two sessions, first my upgrade presentation and like in Mexico as there was a high number of students so I changed the emphasis of the talk as to how to approach the going 'there' from 'here' part of IT projects using Fusion as an example. There were a couple of EBS customers in the room so later in the day I privately took questions from them, although I had to find someone else to answer the 'EBS doesn't run well on 2 node RAC' questions! 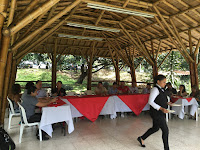 Tim and I were the only people who did the whole tour but Deiby and Alexis had done a few other countries and Frank Munz and Trond Enstad joined us from the Southern tour.

After a wonderful lunch served in a Bambi structure in the grounds I was back on again with my PaaS44SaaS. There was actually more middleware included in the agenda than I would normally expect, and there were great sessions on Weblogic, ADF and SOA. Mauricio Naranjo is an ACE Alumni who I have met previously in Latin America and on the ACE circuit and he is the mentor of Alexis Lopez that I met earlier in the tour in Panama where he was speaking. More about Alexis and Mauricio in a later blog. 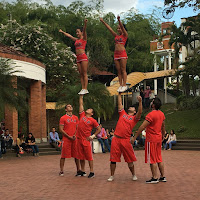 At the end of the day the students had some entertainment for us, break dancing, hip hop, cheer leading, it was very impressive in an outdoor courtyard with brick floor rather than a traditional gym.

In the evening there was a dinner in a restaurant arranged by the user group, traditional food and drink, which went on later than I would normally like but I didn't have a session Friday so didn't mind too much.

I spent a lot of time speaking to Trond Enstad someone I have seen around but not really spoke to. I found him real I interesting and a master of many languages. Norwegian by birth he now lives in Spain and gave his seasons in Spanish.

Friday was just 4 sessions followed by workshops and I had a clear day so I took the opportunity to do some sight seeing with Alexis and Deiby. Leaving Tm behind to work on his videos, blogs and website.

I wish I had arrived in Pereira in a better mood, but the conference made up for it. I had lots of conversations with partners, end users and many students. People who are genuinely interested in what we do; a great conference to finish with.

And I also learnt how to spell Colombia correctly. 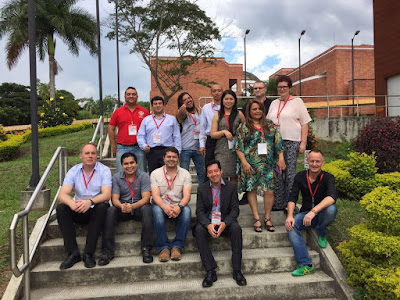