OTNTourLA - The Journey to Colombia

The journey was not my finest hour; I had a total sense of humour failure.

I think I was never going to enjoy the journey, there was 3 legs we had always seemed excessive but then we heard from local peers on the tour that there was the option to do a much simpler Guatemala, Panama, Pereira than the Guatemala, San Salvador, Bogota, Pereira than we were doing! This would also have allowed Tim to fly home via Panama, the same route he came in on and thus saved a significant amount of money by having a return flight.

We book through Oracle travel, but they don't immediately see some options and if you have more than 10 legs their system no longer optimises the entire journey. During the tour I was trying to get some quotes for an APAC visit and hit the same issues. By pricing a refund to my first port of call and then doing the rest as a round set of legs it was must easier and much, much cheaper.

Anyway back to my miserable day, remember I did believe I had earned enough good travel karma after my Chicago trip; well obviously not. The first leg was fine except for the ungodly hour we started, leaving the hotel at 04:15 am. That was bad enough but my daughter had some news to share with me decided to facetime at 02:30, forgetting I was in a different timezone!!

San Salvador is a very small airport with only about a dozen gates, but it also had only 4 ladies' toilets. Two of these toilets were policed by an armed guard and only for use by passengers checked through to the US. There was a queue of about 30 women and I only had 10 minutes, so that didn't happen; but it should have been a sign to me:

Queuing, they have this in Central America, or rather they have invested in the infrastructure, everywhere you go in their airports there is an extensive network of posts with webbing, creating the network of queues we have come to expect worldwide, however the concept of queuing, i.e. joining the end of the line and taking your turn has yet to be communicated to about 50% of the population.

The second flight to Bogota, was fine, but then we had to navigate a busy hub with no Spanish between us and conflicting information from the Avianca staff we asked, in fact if you wanted 10 different answers just ask 10 different people in red. Time was ticking on and I was getting stressed, and I mean stressed. Immigration was nearly the death of me, or rather anyone thinking about not queuing. Without Tim I could easily have committed murder and ended up in some Bogota jail for the foreseeable.

After traversing the airport at least three times in every dimension we finally, just made our connection for our last flight, which should have been simple enough at under an hour to calm me down.

Pereira has a runway that appears to be built on a cliff, at one point there appeared to be a sheer drop at either side of the runway, which I think freaked me out a bit in the stressed condition I was in.

On arrival in Pereira, this tiny airport appeared to have no signage and no one who spoke any English. I know the official language is Spanish, but there was no one who could help us. If you follow Tim's video blogs you will see that when I get off the last plane my look could quite literally kill. 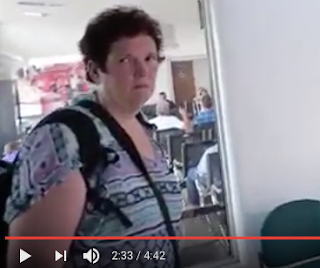 Pereira appears to employ about 50 guys with luggage trolleys all after your business but no information people or ground staff to meet you. Eventually we got our bags and outside found tourist information was advised taxi would take US$ and that it would be 4, then the taxi driver said it would be $7. All academic really as I only had a $10 bill anyway but it is the lack of consistent advice I hate most.

Once at the hotel there was a problem with the booking, and many forms to fill in that they were unable to tell us what they meant. Eventually I got to my room and dumped my stuff.

Tim, bless him was the calm one and once we had found somewhere to get local money and discovered that although no one seemed to be able to speak English they have a plethora of global food outlets we were fine.

An early night was needed to ensure that I could face the next day.