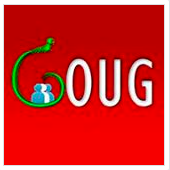 Guatemala was probably the most laid back leg of our tour. Having the event in a hotel, and then staying in that hotel means there isn't too much to worry about logistics.

We arrived mid afternoon and I took the opportunity to bank a few hours sleep. Then Tim, Alex and I went for a very nice local meal. Our hotel I am guessing was classified as an airport hotel as there were several hotels in the 2 blocks either side of ours and from the roof we could see the airport.

Unfortunately it was also an area with a lot of construction and they suggested at check-in I would prefer a high floor. What they didn't tell me was my 'penthouse pit' on the top floor was next to the elevator and directly under the jacuzzi and gyms the roof. Loud does not describe it and this is the first time I have given a 'named' hotel a BAD rating.

Anyway, the conference was very well organised and as well as ACE directors and Oracle it had attracted many speakers from Latin America; what a great testimony to a user group.

They had 3 streams in Spanish and 2 that had translation. I always worry about translation but apparently they like my 'beautiful English accent' as well!
I had 3 sessions nicely spread out, 'Is Cloud the same around the World?', 'PaaS4SaaS' and the 'Digital Disruption' session. I love this last one, people haven't really thought what a business model change Oracle and the whole eco-system is going through.

One of the other speakers who was on the tour told me afterwards that although he works for Oracle he hadn't appreciated the impact, and how much my session has given him to think about. That really encouraged me, the original idea started in a blog posting and then I was asked to expand for a OTech magazine article.

In the evening there was a speakers dinner that was held a golf club. Last year they were there as well and people like Heli who had attended said how much fun it was but I didn't expect to enjoy it as much as I did. We all had a go on the driving range and some people were better than others and I think had we have had the Zacappa before the golf instead of after the dinner I may have climbed the rankings!

Tuesday was a free day, so Deiby the User group leader, his fiancé and sister, took Tim, Carlos an ACE Director originally from Mexico but long time based in the US, and I to Antigua. I had been two years ago, Cesar and his wife Amy took me, and I loved it. Cesar was at the user group event but I didn't get to see Amy again as she is expecting a baby very soon. 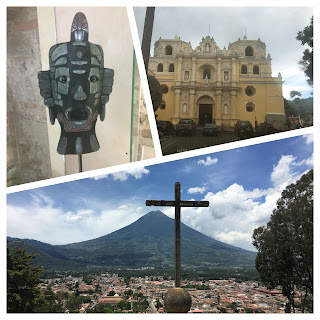 Antigua is a beautiful city, locked in time. We started by looking over the city, which isn't that big, from the Cerro de la Cruz. The story is the people lived by the Volcano, but when it erupted they moved into the valley. They then chose to move back but the volcano filled with rain and eventually exploded flooding the village, so they had to move again. The volcano is now known as the water volcano.

Then we had a private tour of a previously closed order of nuns in the Capuchinas Convent. It was amazing, how they lived but to me the architecture of the building and how cool it stayed despite the blistering heat. I was flagging. My favourite part was the echo chamber beneath was a courtyard of individual prayer cells formed in a circle. We were encouraged to sing, which I can't but a couple of lines of "How Great thou Art" did sound appropriate.

Tim was in heaven because they had a laundry in the convent. 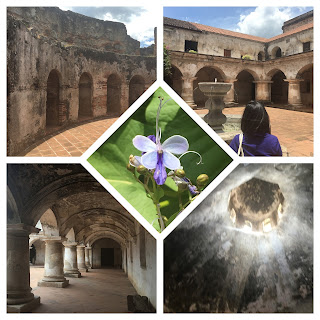 No tour of anywhere can avoid the locals trying to sell you something, In both India  and China we had to endure factories, and here it was Guatemalan jade which is harder than Chinese jade.

Then we he a fantastic local meal, whilst the daily rains had their fun. Then we drove around the amazing cobbled streets looking at other landmarks and stopping for a few churches, looking at the floats for the Holy Week ceremonies, and then finished up with a little shopping to local crafts. It is no wonder that Dieby and his bride have chosen to get married in Antigua. 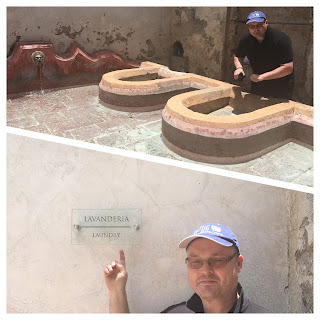 P.S. If you read Tim's blog you may think I simply copied him but it isn't true. We both wrote them on the flight, which we did not sit together on, he is just quicker at publishing them. So I am getting my own back by posting this picture of him with the Laundry in the convent.