Partner of The Year Awards

Last year UKOUG instigated Partner Awards where our members vote for partners in 20 categories. It was a great success so I was really looking forward to this years’ awards ceremony. It was held in the Landmark Hotel and everyone had a great time. 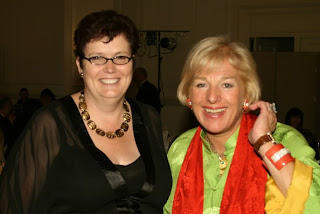 My job is to look after the guest speaker and this year we had Carol Thatcher daughter of the Iron Lady and one time Queen of the Jungle, which is how she asked me to introduce her. She gave a very funny rendition of incidents in not only her life but all of her family. If you see me ask me about Margaret Thatcher wearing THE Terminator’s Shades at a very important funeral! When I talked to Carol about the awards I wanted her to understand how important it is that whilst Oracle give awards directly they are decided on their criteria whereas the UKOUG awards are totally independent of Oracle and voted on by customers. Carol understood immediately and said it was like comparing Political Voting in government (like mummy had) with the popular vote like Carol had to win ‘I’m a Celebrity. Very astute.

Back to the awards, the partners were very passionate about their achievements and a great evening was had by all. It was important for partners to have an evening to celebrate success in this hard economic times and for UKOUG it made money which always helps to keep membership costs down.
Posted by Debra Lilley at 22:04