I arrived back from the US on the hottest day of the year, arrived at my hotel, shown to my room, in the attic with no air conditioning, but never mind I was so tired I would have slept anywhere.

A few hours later and it was time to meet up the the team also staying at the hotel before our Siebel Conference evnt the next day. I stopped moaning about the room as actually I had a fan which appeared to be rather a luxury :) 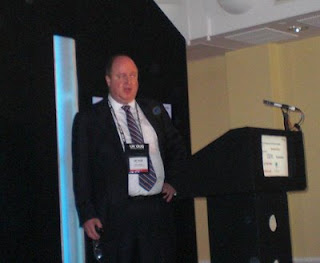 It was good to see Steve Austen, Joint Siebel Committee Chair kick off the event (picture).

The event itself was great, Anthony Lye SVP for Siebel was over from the US and as always gave a fantastic talk on where Siebel is and where it is going. Siebel is I believe at the front of adopting new technology (apart from Fusion Applications of course, but they are not here yet), and there is always more to see.The committee had worked hard to put together the agenda which included a comentary on CRM today from a well known journalist in this field Stuart Laughlan, food for thought.

BAck to the fans, the only disapointment for me was that Ascot did not have air conditioning and how I wish I had stolen the hotel fan. We did have a little issue when someone tried to use a pnumatic drill outside but Julius from UKOUG came to the rescue, those assertiveness training courses paid off again and we continued with relative peace and quiet.

Siebel was the 5th of our 7 events for this year's conference series.
Posted by Debra Lilley at 13:45